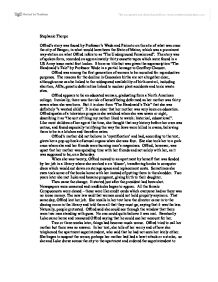 Offred's story was found by Professor's Wade and Pieixoto on the site of what was once the city of Bangor, in what would have been the State of Maine, which was a prominent way-station on what Offred refers to as &quot;The Underground Femaleroad&quot;.

Stephanie Thorpe Offred's story was found by Professor's Wade and Pieixoto on the site of what was once the city of Bangor, in what would have been the State of Maine, which was a prominent way-station on what Offred refers to as "The Underground Femaleroad". The story was of spoken form, recorded on approximately thirty cassette tapes which were found in a US Army issue metal foot locker. It bore no title but was given the superscription "The Handmaid's Tale" by Professor Wade in a partial homage to Geoffrey Chaucer. Offred was among the first generation of women to be recruited for reproductive purposes. The reasons for the decline in Caucasian births are not altogether clear, although some can be linked to the widespread availability of birth control, including abortion; AIDs; genetic deformities linked to nuclear plant accidents and toxic waste sites. Offred appears to be an educated woman, graduating from a North American college. Ironically, there was the risk of herself being deformed as her mother was thirty seven when she was born. But it is clear from "The Handmaid's Tale" that she was definitely "a wanted child". It is also clear that her mother was very keen on education. Offred speaks of a television program she watched when she was seven or eight, describing it as "the sort of thing my mother liked to watch: historical, educational". ...read more.

Luke noticed the man was picking up the telephone so got back into the car fast and they sped off in to the woods, where they got out of the car and ran. As they ran, Offred says they could hear shots behind them. She pulled her daughter to the ground and lay on top of her to shield her. But they became separated and never saw each other again. Much later, however, whilst Offred was a Handmaid for Serena Joy, Serena showed her a picture of her daughter and Offred realised that she was no longer a part of her daughter's life. Offred spent time at the Rachel and Leah Re-education Centre, which was commonly called 'The Red Centre', situated in an old high school. Offred and the others slept in what had once been the gymnasium, in army cots set up in rows with spaces between so they could not talk. There were flannelette sheets and army issue blankets. They were patrolled by two Aunts with cattle prods slung on belts. In here, the girls learnt to whisper without sound and to lip-read, and with this they exchanged names from bed to bed. One day, when Offred was lying on her bed for the prescribed afternoon rest, her old friend Moira was brought in. Both knew that friendships were suspicious, so did not acknowledge each other properly. ...read more.

Once again, they could not acknowledge each other's presence, but they used their former signal to meet in the toilets, where Moira filled Offred in on what had happened to her since they last met. After Serena Joy had taken Offred to see Nick, Offred went back to Nick on several occasions by herself. She says that he began to take the place of Luke in her head, although she also says that she tried to fight against such thoughts. Soon after this, the black van came to the household. But it was Nick who came up the stairs to take Offred away. We do not know who had called for the van, and the fact that it was Nick who came to get her could suggest that this was not an ordinary occasion but perhaps that Nick intended to rescue her and to take her to a safe place, for a new beginning. It is believed that Nick was a member of the Mayday underground, which was similar to Underground Femaleroad, and it is not unusual that one of these Mayday members could be placed as chauffer to someone as high up as Waterford. There are many possibilities as to what happened to Offred. She may have been smuggled over the border of Gilead, or on the other hand she may have been recaptured. We shall never know. Commentary I have chosen The Handmaid's Tale by Margaret Atwood for my text transformation because I enjoyed reading it and wanted to explore it further. ...read more.