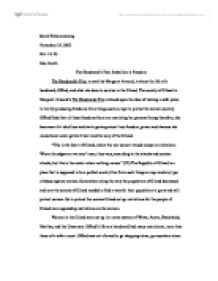 The Handmaid's Tale: Rebellion is Freedom

Sarah Pathammavong November 25, 2002 Brit. Lit 3b Mrs. Smith The Handmaid's Tale: Rebellion is Freedom The Handmaid's Tale, a novel by Margaret Atwood, is about the life of a handmaid, Offred, and what she does to survive in the Gilead. The society of Gilead in Margaret Atwood's The Handmaids Tale is based upon the idea of making a safer place to live by producing freedoms from things such as r**e to protect the women society. Offred finds that all these freedoms from are restricting her personal being therefore; she becomes a bit rebellious and starts gaining actual true freedom, power and chances she would have never gotten if she lived the way of the Gilead. "This is the heart of Gilead, where the war cannot intrude except on television. Where the edges are we aren't sure, they vary, according to the attacks and counter attacks; but this is the center where nothing moves." (23) The Republic of Gilead is a place that is supposed to be a perfect society free from such things as r**e and any type of abuse against women. Somewhere along the way the population of Gilead decreased and now the society of Gilead needed to find a way for their population to grow and still protect women. So to protect the women Gilead set up restrictions for the people of Gilead more appending restrictions on the women. Women in the Gilead were set up in a caste system of Wives, Aunts, Handmaids, Marthas, and the Unwomen. ...read more.

So easily Offred goes on reading many magazines and books such as Vogue, Esquire, Reader's Digest, Ms., and Hard Times by Charles Dickens. Another power that Offred attains is the power of words. She is given the chance to hold a pen. Since the handmaids were banned from writing or reading Offred takes advantage of the little freedom she gets. "The pen between my fingers is sensuous, alive almost, I can feel its power, the power of the words it contains." (186) Another relationship that Offred forms is with Nick. Offred has always been some what attracted to Nick, but now when she forms a relationship with Serena Joy she is given the opportunity to show her feeling to Nick therefore making a relationship with Nick. Her relationship with Serena Joy brings about more then Nick, Serena Joy shows her a picture of her daughter and also a cigarette, more importantly the match that gives her ideas about an escape, "I could burn the house down...An escape quick and narrow."(209) In Offerd's relationship with Nick, she gains the freedom to "make love". Now Offred is using Nick as the Commander is using her. Although Offred cannot fullfil her l**t for love with the Commander, she can fulfill it with Nick. She goes to him almost every night, not just to get pregnant anymore but for the comfort of love. In Nick Offred has gained trust in him; she has told him all of her secrets dealing with the past and what is happening now. ...read more.

This was the same situation with the Commander and Nick, plus Nick was given compensation for his work. For Serena joy and Offred, there really was not any danger for Serena Joy, because she trusted Nick. So why did Offred trust her? Because Offred saw a chance and saw what Serena Joy would gain from it and what Offred herself would gain from it. Offred and Ofglen have trust in each other because they have the same beliefs and it would be vital to both of them if one of them told. Offred had trust in Nick because he never refused to let her in at night. But if one of these stepping-stones clashed the whole crew would be taken down. Such as why Ofglen did not reveal many other names of the other handmaids in their "Mayday" group. Offred also saw how much trust she had in Ofglen when she found out that Ofglen had hung herself when she found out that a van was coming for her. She could have hanged herself for reasons of freeing herself from being tortured and interrogated to giving out names of other rebellious handmaids. In the end, the Offred seemed to escape the society of Gilead. Slowly but surely she at least was free in her mind if not physically. How ironic that Gilead began by people rebelling against the world to be freedom from the society and freedom to walk peacefully, but now people of Gilead are rebelling to achieve freedom from the Gilead life and the freedom to walk freely and peacefully. ...read more.