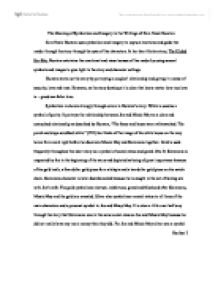 The Meaning of Symbolism and Imagery in the Writings of Zora Neale Hurston.

The Meaning of Symbolism and Imagery in the Writings of Zora Neale Hurston Zora Neale Hurston uses symbolism and imagery to capture emotions and guide the reader through the story through the eyes of the characters. In her short fiction story, The Gilded Six-Bits, Hurston entertains the emotional and visual senses of the reader by using several symbols and images to give light to the story and character settings. Hurston starts out the story by portraying a couples' relationship and giving it a sense of security, love and trust. However, as the story develops it is clear that know matter how true love is - greed can falter love. Symbolism is shown strongly through colors in Hurston's story. White is used as a symbol of purity. It portrays the relationship between Joe and Missie May as a clean and untouched relationship as described by Hurston, "The fence and house were whitewashed. The porch and steps scrubbed white." (252) Joe thinks of the image of his white house on the way home from work right before he discovers Missie May and Slemmons together. ...read more.

Joe and Missie May's magic number is nine. This stands for the nine silver dollars that Joe would throw into the house every Saturday. After she and Slemmons were caught together Joe no longer threw the coins into the house on Saturdays. Slemmons is told to have two gold pieces on him in the amounts of five and ten which is the amount of coins that Joe throws into the house at the end of the story. Slemmons uses numbers in an abstract way to describe people. He associates the number forty with the word forte and Joe doesn't understand what he means by it. Slemmons ironically opens an ice cream shop. Ice cream is a universal symbol for something that is sweet but cold. Slemmons was seen as sweet and suave as was Missie May until the two got together; then Joe viewed them as being cold. Clothing is another social status symbol. Slemmons is described as someone who wore fine clothes. Later in the story Joe calls them rags. ...read more.

Nothin' worries 'em." This was surely not Joe's case at all but his character tells otherwise. Hurston also uses laughter as a private symbol in another one of her writings. "They made burning statements with questions, and killing tools out of laughs." (Their Eyes Were Watching God 2) "Pearl Stone opened her mouth and laughed real hard because she didn't know what else to do." (Their Eyes Were Watching God 2-3) Hurston's real life is story is a mystery according to Ann Ducile's book review in The New York Times. She has conflicting age and birth date documents due to her habitual lying. "...although she gave the year of her birth as 1910, rather than 1891, as scholars have now determined." (The New York Times) Literature and The Writing Process has her birth date listed as 1901. Her birthplace is also not certain. She has said that she was born in Eatonville but it is assumed that she was born in Notasulga, Alaska. Nonetheless, Hurston has made a mark in the history of writing with her cultural relations and peers. According to The New York Times Hurlbut 4 article there are festivals, foundations, literary societies, endowed chairs, journals, honors and awards in the name of Zora. ...read more.