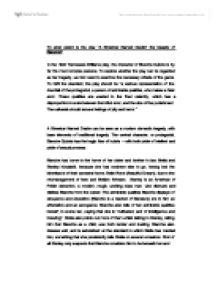 To what extent is the play &quot;A Streetcar Named Desire&quot; the tragedy of Blanche?

To what extent is the play "A Streetcar Named Desire" the tragedy of Blanche? In the 1945 Tennessee Williams play, the character of Blanche Dubois is by far the most complex persona. To explore whether the play can be regarded as her tragedy, we first need to examine the necessary criteria of the genre. To fulfil the standard, the play should be "a serious representation of the downfall of the protagonist, a person of admirable qualities, who makes a fatal error. These qualities are wasted in the final calamity, which has a disproportion in scale between the initial error, and the size of the punishment. The catharsis should arouse feelings of pity and terror." A Streetcar Named Desire can be seen as a modern domestic tragedy, with base elements of traditional tragedy. The central character, or protagonist, Blanche Dubois has the tragic flaw of hubris - with both pride of intellect and pride of s****l prowess. Blanche has come to the home of her sister and brother in law Stella and Stanley Kowalski, because she has nowhere else to go, having lost the inheritance of their ancestral home, Belle Reve (Beautiful Dream), due to the mismanagement of hers and Stella's forbears. ...read more.

In the course of the play he appears obsessed with finding Blanche's weakness; when he discovers that she has committed s****l indiscretions in Laurel and senses her feelings of guilt concerning them, he immediately acts. Blanche's past is revealed to the reader by her flashbacks, the discoveries that Stanley makes about her, and in her late night conversations with Mitch. It is both colourful and unhappy. She fell deeply in love and married very young to a poet called Allen Grey, whom she then discovered in a h********l act with friend. Later, after she expressed her disgust at him, a shame filled Allen shot and killed himself. Blanche has had to live with the guilt and loneliness that this caused her, and spent much of her time sleeping with other men for both comfort, and later on after nursing and then burying both her parents and losing Belle Reve, for a roof over her head. Mitch, whom she had seen as her way out of her problem of being homeless and alone, tells her that she is not clean enough to reside in the same house as his dying mother whom he loves and cares for. ...read more.

They are in an anguished state, with Mitch shouting to Stanley "You! You done this to her!" and Stella calling out her sisters name, sobbing on the steps of the apartment. Tennessee Williams told Elia Kazan, who directed "A Streetcar Named Desire in 1959: "There are no 'good' or 'bad' people. Some are a little better or a little worse, but all are activated more by misunderstanding than by malice. A blindness to what is going on in each other's hearts. Stanley sees Blanche not as a desperate, driven creature backed into a last corner to make a last desperate stand - but as a calculating b***h with 'round heels'.... Nobody sees anybody truly but all through the flaws of their own egos. That is the way we all see each other in life. "I remember you asked me what should an audience feel for Blanche. Certainly pity. It is a tragedy with the classic aim of producing a catharsis of pity and terror, and in order to do that, Blanche must finally have the understanding and compassion of the audience. This without creating a black-dyed villain in Stanley." This would indicate that Williams fully intended that the character of Blanche Dubois should be seen as a tragic figure; that the play "A Streetcar Named Desire" should be viewed as her tragedy. ...read more.