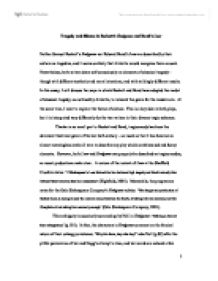 Tragedy and Silence in Beckett's Endgame and Bond's Lear

Tragedy and Silence in Beckett's Endgame and Bond's Lear Neither Samuel Beckett's Endgame nor Edward Bond's Lear are described by their authors as tragedies, and it seems unlikely that Aristotle would recognise them as such. Nevertheless, both writers draw self-consciously on elements of classical tragedy - though with different aesthetic and moral intentions, and with strikingly different results. In this essay, I will discuss the ways in which Beckett and Bond have adapted the model of classical tragedy, as outlined by Aristotle, to reinvent the genre for the modern era. At the same time, I want to explore the theme of silence. This is a key idea in both plays, but it is interpreted very differently by the two writers in their diverse tragic schemes. Thanks in no small part to Beckett and Bond, tragicomedy has been the dominant theatrical genre of the last half-century - so much so that it has become an almost meaningless catch-all term to describe any play which combines sad and funny elements. However, both Lear and Endgame can properly be described as tragicomedies, as recent productions make clear. A review of the revival of Lear at the Sheffield Crucible states: 'If Shakespeare's Lear blurred the line between high tragedy and black comedy then Edward Bond removes that line completely' (Highfield, 2005). Meanwhile, the programme notes for the Oslo Shakespeare Company's Endgame advise: 'The danger any production of Beckett faces is trying to steer the correct course between the Scylla of taking him too seriously and the Charybdis of not taking him seriously enough' (Oslo Shakespeare Company, 2004). This ambiguity is succinctly summed up by Nell in Endgame: 'Nothing is funnier than unhappiness' (p.101). In fact, the characters in Endgame comment on the farcical nature of their unhappy existence: 'Why this farce, day after day?' asks Nell (p.99) after the pitiful pantomime of her and Nagg's attempt to kiss, and her words are echoed a few minutes later by Clov (p.107). ...read more.

After all, Beckett sees Hamm and his fellow characters' situation as a representation of the essence of all human existence: as Aristotle explains, 'pity is aroused by unmerited misfortune, fear by the misfortune of a man like ourselves' (Cooper ed., 1997) However, Endgame offers none of the consolations which classical tragedy provides. For Aristotle, tragedy consists of action which must have a beginning, middle and an end. If nothing else, therefore, the end of the play brings us a sense of relief because the characters' tribulations are finally over (or, in the case of Bond's epic theatre, because we have learnt something). Edward Bond, who is a vociferous critic of Beckett, complains: 'This is not the case with the theatre of the absurd. Here, life has been deprived of meaning: there is a beginning and an end, but no middle' (Bond, 2000). In fact Endgame, like much of Beckett's work, is one long ending which never quite comes. Its title, taken from chess, describes the final stages of a game which are entirely predictable, and therefore meaningless. In this case, the game continues in an interminable stalemate. Beckett denies his characters, and the audience, the comfort of a conclusion. 'Have you not had enough?'(p.94), 'Do you not think this has gone on long enough?' (p.114) Hamm asks Clov. Each time Clov instinctively replies 'Yes!' For Hamm, Clov, Nagg and Nell, even death would be preferable to a continuation of their current situation. When Hamm threatens to give him nothing more to eat, Clov seems happy with the prospect of starving to death. Hamm quickly comes up with a crueller threat: 'I'll give you just enough to keep you from dying' (p.95). Although Nell appears to be dead by the end of the play, this cannot be seen as any sort of closure. The chances are they thought she was dead yesterday as well - it would be hard to tell anyway. ...read more.

Then you don't have to go on doing things that never work in the hope that they might one day - because now you know why they can't' (1978, p.11). This comes from Bond's preface to Lear, but ironically it could also serve as an interpretation of Endgame. Like Vladimir and Estragon in Waiting for Godot, the characters in Endgame 'go on doing things that never work in the hope that they might one day' - a hope which is shown to be a vain one. Nevertheless, Beckett does not completely close off the opportunity for change: it is possible (depending on the actor or the reader's interpretation) to imagine that, one day, Clov will leave and Vladimir will stop waiting. Indeed, the text is ambiguous enough to suggest that Clov could leave on this occasion. Even if this does not happen, it is wrong to assume that Beckett's message is a wholly pessimistic one. His characters may not learn, but we the audience are not obliged to share their bleak conclusions. We go away from the theatre with the knowledge that 'doing things that never work in the hope that they might one day' is pointless - the same truth that Bond's Lear teaches, although presented in a very different way. Bond is a didactic writer: he wants to explain how and why things work (or fail to work). Beckett has no such intentions: he gives us an image of how things are, and leaves us to interpret it as we will. In many ways, the two writers appear to be diametrically opposed: we have seen this in the scale and structure of their plays, in the way they evoke or deny the audience's emotions and empathy, and especially in the way that they treat the idea of silence. The ways in which they have rewritten Aristotle's tragic rulebook are, as we would expect, very different. Yet in drawing upon the formula of classical tragedy, both Beckett and Bond have created plays which remain highly powerful, searching and vitally relevant. ...read more.