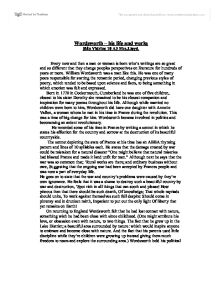 Wordsworth &amp;#150; his life and works

Wordsworth - his life and works Si�n Vidrine 10 A3 Mrs.Lloyd. Every now and then a man or woman is born who's writings are so great and so different that they change peoples perspectives on literature for hundreds of years or more. William Wordsworth was a man like this. He was one of many poets responsible for starting the romantic period, changing previous styles of poetry, which tended to be based upon science and facts, to being something in which emotion was felt and expressed. Born in 1770 in Cockermouth, Cumberland he was one of five children, closest to his sister Dorothy she remained to be his closest companion and inspiration for many poems throughout his life. Although while married no children were born to him, Wordsworth did have one daughter with Annette Vallon, a woman whom he met in his time in France during the revolution. This was a time of big change for him. Wordsworth became involved in politics and becomming an ardent revolutionary. He recorded some of his time in France by writing a sonnet in which he states his affection for the country and sorrow at the destruction of its beautiful countryside. ...read more.

He shows what pleasure this experience gives him as he states, 'lustily I dipped my oars into the silent lake,' this line in addition to being an alliteration has evident rhythm, which in this situation reflects the rhythm of oars rowing. Wordsworth manages to create great atmosphere in this section by drawing on words, his choice of descriptive words (lustily etc) and the fact that he reports every sound and sight seen and heard adds to this. His descriptions of the boat continue throughout the passage and now he states what is felt (in my opinion) by the reader earlier on, 'Heaving through the water like a swan,' conveys the effortlessness with which the boat glides on the surface of the lake. The mood up until now is that of sheer enjoyment but from here onwards that does change. 'When from behind that craggy steep till then the horizons bound, a huge peak black and huge. As if with voluntary power instinct.' Wordsworth changes the atmosphere radically in just a couple of lines. The romantic picture, which was painted in the reader's imagination, has now been erased and replaced with one, which is almost frightening. ...read more.

These poems in which feelings are stated so clearly show that Wordsworth was a kind hearted man who felt for others. Wordsworth was unique, his style and descriptions different from any other poet of his time. His passion, emotion and beliefs as a pantheist (the most evident expression of this I feel is in the last verse of the Lucy poem, when the latter has passed away and Wordsworth states: 'No motion has she now, no force; She neither hears nor sees, Roll'd round in earth's diurnal course With rocks and stones and trees!' He believes, as a pantheist that her body will reunite with nature) are expressed in all of his work and is passed on to the reader by means of just words. A versatile writer he could be both in-depth (The Prelude) and simple (We are seven). This was an advantage to be able to vary is work drastically to keep readers enthralled. I feel it might be due to his unusual upbringing that Wordsworth's work is so unique. Learning morals and maturity form nature certainly made him very different to others. But it is this which enabled him to become 'Poet Laureate' before his death in 1843 and which enabled him to leave behind a legacy in English Literature. ...read more.