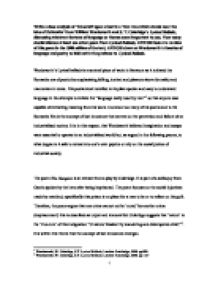 Write a close analysis of Lines left upon a Seat in a Yew-tree which stands near the lake of Esthwaite from William Wordsworth and S. T. Coleridges Lyrical Ballads, discussing whatever features of language or themes seem important.

Write a close analysis of ‘Lines left upon a Seat in a Yew-tree which stands near the lake of Esthwaite’ from William Wordsworth and S. T. Coleridge’s Lyrical Ballads, discussing whatever features of language or themes seem important to you. Your essay should discuss at least one other poem from Lyrical Ballads, AND/OR look at a version of this poem in the 1800 edition of the text, AND/OR draw on Wordsworth’s theories of language and poetry as laid out in the prefaces to Lyrical Ballads.

Wordsworth’s Lyrical ballads is a seminal piece of work in literature as it initiated the Romantic era of poetry by emphasizing felling, instinct and pleasure above formality and mannerism in verse.  His poetic work revelled in its plain spoken and easy to understand language in his attempts to imitate the “language really used by men”[1] so that anyone was capable of extracting meaning from his work. Common too many of his poems and to the Romantic Era is the concept of lost innocence that centres on the perversion and failure of an industrialised society. It is in this respect, that Wordsworth believed imagination and escape were essential to operate in an industrialised world but, as argued in the following poems, to what degree is it safe to retreat into one’s own psyche or rely on the social justice of industrial society.

The poem The Dungeon is an extract from a play by Coleridge. It is part of a soliloquy from Osorio spoken by the hero after being imprisoned. The poem focuses on the social injustices made by mankind; specifically that prison is no place for a man to be or to reflect on his guilt. Therefore, the poem argues that one crime cannot not be ‘cured’ by another crime (imprisonment) this is described as unjust and immoral but Coleridge suggests that ‘nature’ is the ‘true cure’ of this indignation “O nature/ Healest thy wandering and distempered child:”[2]. It is within this theme that the concept of lost innocence emerges.

As a dramatic speech the poem has two very distinctive parts that contradict. The first portrays anger from the feeling of betrayal and disdain caused by their ‘forefathers’, who implemented “the process of our love and wisdom” to condemn mankind to a “parching poverty”. The language choices reflect the feeling of contempt expressed towards society because of the connotations of inhumanity and guilt: a “loathsome plague”, “savage faces”, “dismal twilight”, “hopelessly deformed” all express. Furthermore, the feeling of decay presented by the language follows the mental and physical  deterioration of the imprisoned man. However, as Coleridge shifts in the second stanza to discuss the possibility of nature as a cure the mood changes. The language changes from harsh and forceful to conveying the beauty of nature and its rapture over mankind. Coleridge assumes that by letting nature “healest thy wandering and distempered child” he will be purged of guilt. He now uses the word child which evokes images of innocence but also referring to the relationship between children’s connection to nature as quoted in Woodsworth’s prefaces. Furthermore, the image of a child in Lyrical Ballads is complete innocence; they are without prejudice and have not been “poisoned” by society- as can be seen in the poems We Are Seven and Anecdote For Fathers. It is this symbolism that suggests nature is the true cure for society’s inhumanity and failure as when you remember the beauty of nature you remember it as a child and are therefore absconded of any guilt associated with an adult society

Similar, to the subject of The Dungeon Woodsworth’s Lines left upon a seat in a Yew-tree which stands near the lake of Esthwaite describes a man who rests by Yew-tree, was “pure in his heart” when he was younger but society corrupted his innocence and he goes to seek healing in nature. The main themes of the poems centre on the two halves it is split into. The first depicts the journey of a man leaving civilisation behind and ‘turning away’ to embrace nature and unable to forget the lost “labours of benevolence” he is forever remorseful. The last stanza functions as the second half of the poem and the main moral is that nature is a great healing force and that it is important to recognise that you cannot live without human interaction but Wordsworth warns to be “ O wiser thou!” and advises against totally immersing yourself in natures solitude. In the second stanza Wordsworth begins to depict the beauty of nature by comparing to the rigid and unforgiving world the Traveller is escaping from, “against the taint / Of dissolute tongues,” but when Wordsworth calls him a “Stranger!” the poem then begins to fall into to the isolation of the Traveller. His only visitors “a straggling sheep, / The stone-chat, or the glancing sand-piper. But as he reflects on his life “fixing his downward eye” he becomes obsessed with himself as he begins to think deeply of his life and nature “A morbid pleasure nourished, tracing here / An emblem of his own unfruitful life” only to be overwhelmed by nature’s beauty compared to his existence, “his heart could not sustain / The beauty still more beauteous.”. However, he is tortured by the need “Of Kindred lovliness” and misses interaction with society,“he would sigh / With mournful joy, to think that others felt / What he must never feel”.It is after this that Wordsworth refers to him as a “lost man!”, he has been lost in isolation, to the beauty of nature and grows regretful and sadder “Til his eye streamed with tears” and eventually dies alone with “the seat as his only monument”. In the conclusion of the poem Woodsworth offers a warning to the Travellers demise, he warns that it is important to preserve “holy forms / Of young imagination”- here the power of imagination is expressed as it is described as a holy form. Wordsworth says “pride is littleness” and instructs “O, be wiser thou! / Instructed that true knowledge leads to love”, the moral here is to use nature of its correct purposes, appreciating it with your imagination and learning from it, but its misuse will lead to a “lowliness of heart” in solitude. Arguably in both poems the concept of solitude is never ‘cured’ but as Wordsworth suggest a healthy balance between the natural and ever expanding industrial world is the ‘cure’ as pursuing too far into nature and imagination leads to your demise.

It is apparent in the above poems that they pursue a social agenda and are highly political forms that devote themselves to recognising the failure of society. But what is seen as a celebration of nature is an avid ploy to change society. Woodsworth’s work as set out in the prefaces is intended to be consumed by all men and avoid gross grandeur as the “Poet must descend from his supposed height, and, in order to excite rational sympathy, he must express himself as other men express themselves”[3]. It is within his theories of poetry that Wordsworth helped to encourage the movement of the Romantic Era by extracting simple and rational ideas to relate to the average man. His goal, if successful, was to attain “a species of poetry, which is genuine poetry; in its nature well adapted to interest mankind permanently”[4]