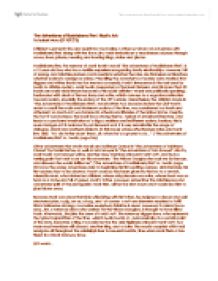 'The Adventures of Huckleberry Finn': Huck's Ark By Isabel Mora (01109275) Children's games? Hide and seek? No! Too boring. I rather set about an adventure with Huckleberry Finn! Along with the slave Jim, Huck embarks on a treacherous odyssey through caves, rivers, prisons, meeting and loading kings, dukes and pirates. Huckleberry Finn, the narrator of Mark Twain's novel "The adventures of Huckleberry Finn", is a 12 year-old boy who has a terrible experience regarding family relationships. However, full of energy and mischievousness, Huck questions whether the rules are blameless or iniquitous, whether society is condign or askew. Prevailing the cataclysms of society (who marked that n*****s and whites should not be treated as equals), Huck's innocence is the tool used by Twain to criticize society. ...read more.

He makes everybody think he is dead. However, it cannot be so easy, Jim, a runaway slave who worked for the Widow Douglass, is thought to have killed Huck. Afterwards, Jim joins the crew of Huck's raft. The runaway n****r slave, who represents the typical superstition of the time -which Twain mocks at-, paradoxically, in a certain point of the story, becomes a king. He would not be the only highness onboard Huck's raft, two more royal members will aboard, another king, and a duke. The royalty coupled with Huck navigate all throughout the Mississippi river for several months, time when Huck finds a true friend in a black runaway slave. 552 words... ...read more.