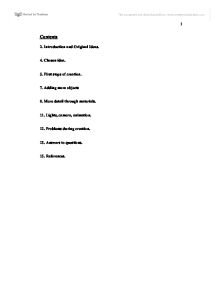 This report is to describe the process I went through to create a 3D model of a chosen object and to animate it using 3D Studio Max software.

This report is to describe the process I went through to create a 3D model of a chosen object and to animate it using 3D Studio Max software.  During this report I will cover the following aspects:

To start with three ideas were very basically sketched and ideas of how they would be created were thought of.  The three electrical objects which were short-listed were:

To create this it would take a simple couple of boxes representing different components of the phone (main unit, battery, sim card), the animation would show all these come together.

The Laptop would be two simple boxes connected on a hinge, the animation would show it open and cd enter its drive.

Again boxes would do for the general shape also applying a plane for the screen, the animation would show the T.V turn on and an image appear upon it.

The object selected was, after much deliberation, a laptop computer.

This object was then clone copied by holding in the shift key and dragging to the left, then selecting to copy it enough times for all keys on the keypad to be created.  The problem mentioned earlier then arose and will be covered in more detail later on, problem being adding text to the keys.  I did it using the text shape and found it was the wrong method to use.  Due to my failure and subsequent time problems the idea of text on the keys was aborted.

The keys that would keep the original shape of the clone were then aligned with each other and then aligned appropriately with the ‘base’.  Some keys were going to be an irregular shape e.g. return key.  Some would just be a different size e.g. shift key, than the original key model.  To get these shapes extruding the vertices in the sub-object mode created the perfect effect.  They were all then lined up correctly on the base giving me my complete keypad.  This was then grouped.

The wristpads (if that’s what they are called!) were next, these were done using the ‘line’ tool under the ‘splines’ shape menu.  Drawing one slightly curved line connected to three other shorter straight lines , then connecting them all with a carefully dragged curved line, I had my shape.  It was then converted to an editable mesh and the top polygon slightly extruded.  It was coloured grey and named ‘wristpad 1’. The object was then cloned once, producing ‘wristpad 2’.  This was then mirrored on the Y axis.  Both objects were then positioned on the base, the left wristpad had to have its two northern most vertices extruded to meet the bottom of the keys.

The Importation and Exportation of data is when something has been created using a       certain software package and has been brought into another package by ‘importing’ or ‘exporting’ it. For example if you are creating an object in 3D Studio Max you could import textures which have been created using a different art package and apply them to the object being created in Max.  Similarly you could export an object you have created within Max and apply it within another package as long as the package supports the specific files that you can use within Max.

The files which are supported are listed below:

There were two books which I used and they enabled me to create the model: