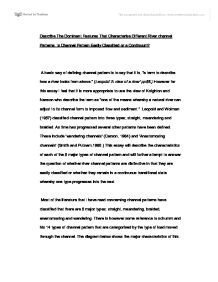 Describe The Dominant Features That Characterise Different River channel Patterns. Is Channel Pattern Easily Classified or a Continuum? A basic way of defining channel pattern is to say that it is, "a term to describe how a river looks from above." (Leopold 'A view of a river' pp56.) However for this essay I feel that it is more appropriate to use the view of Knighton and Nanson who describe the term as "one of the means whereby a natural river can adjust to its channel form to imposed flow and sediment." Leopold and Wolman (1957) classified channel pattern into three types; straight, meandering and braided. As time has progressed several other patterns have been defined. These include 'wandering channels' (Carson, 1984) and 'Anastomosing channels' (Smith and Putnam,1980.) This essay will describe the characteristics of each of the 5 major types of channel pattern and will further attempt to answer the question of whether river channel patterns are distinctive in that they are easily classified or whether they remain in a continuous transitional state whereby one type progresses into the next. Most of the literature that I have read concerning channel patterns have classified that there are 5 major types; straight, meandering, braided, anastomosing and wandering. ...read more.

Some rivers migrate. Kinoshita (1901) identified 2 basic types of river meander: meanders of low amplitude which migrate consistently downstream and maintain their symmetric form; and meanders of large amplitude in whch differential shifting at points around the bends leads to complex plan form growth. Braided reaches are multi-channel forms in which the channels are separated by bars or islands. They are contained within a dominant pair of floodplain banks. Some examples are the Brahmaputra in Bangladesh, the Sunwapta in Canada and the Rakaia in New Zealand. "The characteristic feature of the braided pattern is the repeated division and joining of channels, and the associated divergence and convergence of flow, which contributes to a high rate of fluvial activity relative to other river types." Hierarchies of channels have been recognized in braided rivers reflecting variations in the level of channel dominance, but the proposed ordering schemes may be difficult to apply consistently. Distinctive toographic levels can be often identified across the channeled area, ranging from the most active channels to elevated, abandoned areas. Generally speaking braided rivers are not geometric. Braided rivers tend to have high slopes with high discharges. You can generally catorgorise them into x and y shape forms. ...read more.

Wandering channels can also take on braid characteristics as braid streams are characterized by frequent shifts in channel position. An example is the 1736-1964 Kosi river in India migrated westward over a distance of 112km, reworking its own deposits and maintaing a braided appearance in the process. Wandering channels have wide shallow channels with large expanses of bare gravel and low braid intensity. They also have well defined pool-riffle sequence with the erosional banks not exclusive to outer bends. There is no universally accepted classification of channel pattern. The classic sub-division of Leopold and Wolman (1957) into straight, meandering and braided has provided a useful starting point but, with the wide variety of channel types now recognized, it is proving to be a limited interpretation (knighton, 1984; Ferguson, 1987). Specifically it gives no explicit recognition to anastomosed channels or wandering channels. It gives the impression that river channels can be easily defined when it has been stated by many that this not the case. River channel patterns merge into one another they don't just change. A number of channel patterns show a lot of features of other channel patterns within them. River patterns are a continuum of one another. Points - - that rivers are acontinum and anasts wander r examples of thios Leopold and Wolmans theory not good because it doesn't show ths. Look in green book. ...read more.