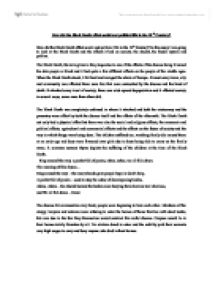 How did the Black Death affect social and political life in the 14th Century?

How did the Black Death affect social and political life in the 14th Century? How did the Black Death affect social and political life in the 14th Century? In this essay I am going to look at the Black Death and the affects it had on society, the church, the feudal system and politics. The Black Death, the term given to the plaque due to one of the effects of the disease being it turned the skin purple or black and it had quite a few different effects on the people of the middle ages. When the Black Death struck, it hit hard and ravaged the whole of Europe. Almost every town, city and community was affected there were few that were untouched by the disease and the hand of death. It attacked every level of society, there was wide spread depopulation and it affected society in several ways, some more than others did. The Black Death was completely unbiased in whom it attacked and both the aristocracy and the peasantry were affect by both the disease itself and the affects of the aftermath. The Black Death not only had a physical effect but there was also the social and religious effects, the economic and political effects, agricultural and commercial effects and the effects on the future of society and the way in which things were being done. ...read more.

The Black Death, with many of the educated clergy dying from the epidemic that was sweeping Europe hit the church hard. Now people everywhere were questioning God, what he stood for and what they believed in. Anything that happened to the church had a direct effect on the morale and beliefs of the people. With people dying at an enormous rate, there was a decrease in available labour. This resulted in half as many peasants to do the work but still with the same amount of fields to work. This amounted in too much work for the few peasants working the land to do. Produce was being ruined; fields were overgrown and neglected because of the sudden shortage in workers. But the peasants saw and knew what was happening and knew they could gain out of this. Their labour was in high demand by the aristocracy and therefore they demanded higher wages. As a result of the Black Death a large percentage of those affected by the disease died. Because of the impact to available labour caused by the Black Death the feudal system that had dominated Europe by the nobles began to collapse. With large numbers of the peasants dying, rent was not being paid and there was a huge shortage of labour. Also where peasants had previously worked for the same family for generations they were saw what was happening and began to take advantage of the labour shortages and moved from lord or noble in order to gain better wages, better incentives and better working conditions. ...read more.

When the disease struck, parliaments were shut down and adjourned, although they later reconvened. In 1348, the Hundred Years' War was suspended as the soldiers were being infected and dying, but it did resume again soon enough. It was on a more local level that the effects were more severe. Towns and cities were hid hard. City councils were ravaged and financial businesses were disrupted and in some cases destroyed due to debtors dying and creditors finding themselves without recourse. Also the construction projects that were underway were put on hold indefinitely or abandoned altogether as craftsmen died and could not be replaced. Governments had to adjust too as land was becoming desolate as whole families died leaving property empty, rents uncollected and paid and as a result tax revenue declined. The Black Death in itself was disastrous enough in the fourteenth century, but arriving when it did it was catastrophic. The mid fourteenth century was indeed not a good time for Europe. The European economy was already having difficulties and the church was also in extremely poor shape too, with the Hundred Years' War adding to the plaque and the loss of life. The effects of the Black Death were indeed made worse due to these other problems and the problems themselves were doubled due to the Black Death. In answering this question I have looked at the effects the Black Death had on society, the church, the feudal system and politics. The effects of the Black Death had radically altered every aspect of European society. ...read more.