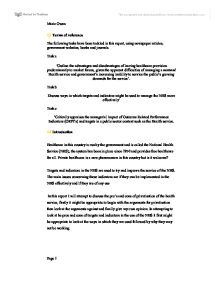 'Outline the advantages and disadvantages of leaving healthcare provision predominantly to market forces, given the apparent difficulties of managing a national Health service'.

1.1 Terms of reference The following tasks have been tackled in this report, using newspaper articles, government websites, books and journals. Task a 'Outline the advantages and disadvantages of leaving healthcare provision predominantly to market forces, given the apparent difficulties of managing a national Health service and government's increasing inability to service the public's growing demands for the service'. Task b Discuss ways in which targets and indicators might be used to manage the NHS more effectively' Task c 'Critically appraises the managerial impact of Outcome Related Performance Indicators (ORPI's) and targets in a public sector context such as the Health service. 1.2 Introduction Healthcare in this country is run by the government and is called the National Health Service (NHS); the system has been in place since 1950 and provides free healthcare for all. Private healthcare is a new phenomenon in this country but is it welcome? Targets and indicators in the NHS are used to try and improve the service of the NHS. The main issues concerning these indicators are if they can be implemented in the NHS effectively and if they are of any use In this report I will attempt to discuss the pro's and cons of privatisation of the health service, firstly it might be appropriate to begin with the arguments for privatisation then look at the arguments against and finally give my own opinion. ...read more.

The NHS has no interest in performing pointless operations whereas according to the British medical journal in 1993 at least one third of private hysterectomies were unnecessary and the number of useless removals of tonsils was an epidemic (Cohen 2000). Further alarming figures published in Cohen article saw pregnant women's death rate in HCA private hospital in London five times above the national average. 1.7 Implementing indicators The NHS assesses performance through six key arrears; * Health improvement * Fair access * Effective delivery of appropriate healthcare * Efficiency * Patient and carer experience * Health outcomes of NHS care These indicators have been developed to help assess the performance of the NHS. The Indicators were developed not to measure quality directly but to draw attention to arrears that may need further investigation or action in the future. In 1998 six clinical indicators were published as clinical indicators for the NHS they were as follows; Layman's Description Indicator Deaths in hospital following surgery Deaths in hospital within 30m days of surgery by method of admission Death in hospital following a fractured hip Deaths in hospital within 30 days of emergency admission with a hip fracture for patients aged 65 and over Deaths in hospital following a heart attack Deaths in hospital within ...read more.

In looking at various studies it has been found that; * Providers of healthcare have more information than consumers. * In order to gain medical treatment privately insurance is required, because some people are healthier from birth markets are unable to guarantee equitable access to healthcare without government intervention. * Private healthcare is threatened by moral hazards and demand inducement. The fact remains however that as Tony Blair says the 'struggle to run the NHS has left scars on his back' (Cohen 2002) henceforth the purchasing of operations from private hospitals has begun. How many people would in the case of their family being under considerable pain forget about the NHS policies of free for all and pay privately. The private sector does deliver and even though I would like to see a better run NHS it seems that this is not possible due to many problems and that privatisation is inevitable. Also throughout this report I have attempted to discuss the use of indicators as tool for managing the NHS. In doing so I believe that while performance indicators can and have been implemented they do however seem to have the affect of improving certain services but at the cost of others. Being as every aspect of the NHS service is of high importance this may not be acceptable. Marie Owen Page 1 ...read more.