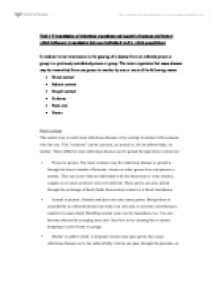 Task 2 Transmission of infectious organisms and agents in humans and factors which influence transmission between individual and to whole populations In medical terms transmission is the passing of a disease from an infected person or group to a previously uninfected person or group. The micro organisms that cause disease may be transmitted from one person to another by one or more of the following means * Direct contact * Indirect contact * Droplet contact * Airborne * Fecal-oral * Vector Direct contact The easiest way to catch most infectious diseases is by coming in contact with someone who has one. This "someone" can be a person, an animal or, for an unborn baby, its mother. Three different ways infectious disease can be spread through direct contact are: * Person to person. The most common way for infectious disease to spread is through the direct transfer of bacteria, viruses or other germs from one person to another. This can occur when an individual with the bacterium or virus touches, coughs on or kisses someone who isn't infected. These germs can also spread through the exchange of body fluids from sexual contact or a blood transfusion. * Animal to person. Animals and pets can carry many germs. ...read more.

Latent infection refers to a persistent infection with possibility of intermittent shedding of pathogens, e.g. varicella zoster virus causing shingles or herpes simplex virus causing cold sores or genital herpes. So for an infection to occur we need an 'agent' this is the entity necessary to cause disease in a susceptible host. There are several characteristics which are important when talking about agents Infectivity - the capacity to cause infection in a susceptible host: * Pathogenicity - the capacity to cause disease in a host. * Virulence - the severity of disease that the agent causes in the host The 'host' is the person that is susceptible to the effect of the agent. The host can be classified as susceptible, immune or infected. The host's response to exposure can vary widely from showing no effect to manifesting sub clinical disease, atypical symptoms, illness or severe illness. The environment is the conditions or influences that are not part of either the agent or the host, but that influence their interaction. There can be a wide variety of factors such as physical, climatologic, biologic, social and economic conditions for example is many infectious disease outbreaks, social and economic conditions cause overcrowding and lead to high levels of exposure. ...read more.

Examples of this are flu and common child hood illnesses such as children pox. Chicken pox is a good example of a disease that occurs in cycles. An infected child entering school for the first time can cause an epidemic in the school as most of the other children will be susceptible as they may not have been exposed to the virus previously so would have no immunity. The incidence and prevalence of disease are determined from statistical analysis of illness and death. The DHSSPS issues a list of "notifyable Diseases" which have to be reported to Public Health Department. Mortality is the incidence of death in the population .Infectious diseases were the major cause of death in the early twentieth century in developed countries, however these have now decreased and disease such as cancer and heart disease are now the major causes of death. Recently we have all been concerned with the news of "Avian Flu" and the transfer of the virus from birds to humans if this was to occur it could become a worldwide major killer. Morbidity refers to the incidence of disease in population and includes both fatal and non-fatal diseases. These statistics give a better overview of the population health as the major cause of illness may not necessary result in death i.e. the common cold and acute digestive system conditions. ...read more.