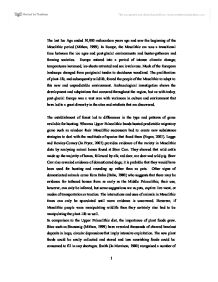 The last Ice Age ended 10,000 radiocarbon years ago and saw the beginning of the Mesolithic period (Mithen, 1999). In Europe, the Mesolithic era was a transitional time between the ice ages and post-glacial environments and hunter-gatherers and farming societies. Europe entered into a period of intense climatic change; temperatures increased, ice-sheets retreated and sea levels rose. Much of the European landscape changed from periglacial tundra to deciduous woodland. The proliferation of plant-life, and subsequently wildlife, forced the people of the Mesolithic to adapt to this new and unpredictable environment. Archaeological investigation shows the development and adaptations that occurred throughout the region, but as with today, post-glacial Europe was a vast area with variances in culture and environment that have led to a great diversity in the sites and artefacts that are discovered. The establishment of forest led to differences in the type and patterns of game available for hunting. Whereas Upper Palaeolithic bands hunted predictable migratory game such as reindeer their Mesolithic successors had to create new subsistence strategies to deal with the multitude of species that faced them (Fagan, 2001). Legge and Rowley-Conwy (In Pryor, 2003) provides evidence of the variety in Mesolithic diets by analysing animal bones found at Starr Carr. ...read more.

If agriculture is seen to be a natural progressional step then these individual finds should be expected. These new food sources presented man with new and complex problems to solve. The reliability and predictability of the Upper Palaeolithic had gone, and Mesolithic man had to start thinking about the future. These needs led to a demand for new technologies. The traditional 'broad-blade' and Maglemosian flint industries were no longer suited to the plethora of new fauna and vegetation. Tools had to be developed to deal with the new environment and archaeological finds chart a huge variety of tools developing through the Mesolithic period. During the Upper Palaeolithic tools for specific tasks such as sewing needles and nets were common and the Palaeolithic traits in the use of burins and step retouching of backing blade-lets continued into the early Mesolithic. However, what is most notable about the changes in Mesolithic toolkits is the increase in specialisation. 'Narrow-blade assemblages' became the norm and microliths are found in abundance throughout Mesolithic sites. This specialisation implies that the Mesolithic people were gaining an understanding of their surroundings and adapting accordingly. Toolkits from sites at the Baltic Sea include canoes and bone-tipped fish spears, harpoons and traps (Fagan) ...read more.

They are similar in shape to the long barrows of the Neolithic and perhaps also have the same symbolic role. Pryor suggests that these shell mounds provide visual markers in the demarcation of territory. Another indicator of increasing social complexity comes with the appearance of cemeteries throughout northern Europe during the Late Mesolithic (Fagan). Aveline's Hole revealed at least 70 individual human remains and suggests this site was used for burial (Pryor). Cemeteries would have had no use in a culture that was always moving around and this probably explains the lack of burial sites in earlier times. There are, however, individual burials from the Upper Palaeolithic such as the Red 'Lady' at Paviland (Pryor). This site reveals the use of ochres and funerary objects such as beads and helps to give an indication of ritual practices from this period onwards as societies became more complex. Many aspects of the European Mesolithic were simply continuations of the Upper Palaeolithic societies. It was, however, a time of continual change and development in both the environment and the cultures themselves. Mesolithic people were not only constantly re-adapting to their varying world, but also developing new subsistence practices, which paved the way for the advent of agriculture. It would seem that the dramatic change in climate had a huge snowballing effect, forcing advances in technology, culture and social interaction. ...read more.