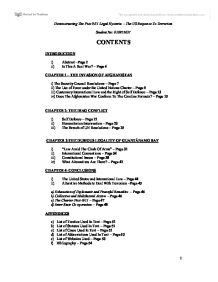 2nd Draft Dissertation - The invasion of Afghanistan, The Iraq conflict, and The dubious legality of Guantanamo bay.

CONTENTS INTRODUCTION i) Abstract -Page 2 ii) Is This A Real War? - Page 4 CHAPTER 1 - THE INVASION OF AFGHANISTAN i) The Security Council Resolutions - Page 7 ii) The Use of Force under the United Nations Charter - Page 9 iii) Customary International Law and the Right of Self Defence - Page 13 iv) Does The Afghanistan War Conform To The Caroline Formula? - Page 15 CHAPTER 2: THE IRAQ CONFLICT i) Self Defence - Page 21 ii) Humanitarian Intervention - Page 23 iii) The Breach of UN Resolutions - Page 25 CHAPTER 3:THE DUBIOUS LEGALITY OF GUANT�NAMO BAY i) "Law Amid The Clash Of Arms" - Page 31 ii) International Conventions - Page 34 iii) Constitutional Issues - Page 38 iv) What Alternatives Are There? - Page 42 CHAPTER 4: CONCLUSIONS i) The United States and International Law - Page 44 ii) Alterative Methods to Deal With Terrorism -Page 45 a) Exhaustion of Diplomatic and Peaceful Remedies - Page 46 b) Collective and Multilateral Action - Page 46 c) The Charter Post-9/11 - Page 47 d) Inter-State Co-operation - Page 48 APPENDICES a) List of Treaties Used In Text - Page 51 b) List of Statutes Used In Text - Page 51 c) List of Cases Used In Text - Page 51 d) List of Abbreviations Used In Text - Page 53 e) List of Websites Used - Page 53 f) Bibliography - Page 54 INTRODUCTION i) Abstract "Sovereign capacity is incapable of legal limitation" - John Austin1 This is the apparent assertion made by the American government today in their conduct towards international legal norms since September 11th. National security and the war on terror have come to define the Bush administration but it has done so at the expense of respect for the rule of law. As this thesis will argue, the United States have attempted to develop new doctrines regarding self-defence and the use of force which mark a distinct departure from the well-established norms of public international law in their response to the post 9/11 terrorist threats. ...read more.

As one of his aides affirmed, "UN Resolutions did not authorise coalition forces to undertake anything other than the liberation of Kuwait87". The suggestion that this restrictive resolution could be prospectively reactivated to legalise an otherwise groundless war against Iraq is extreme. Although Security Council Resolutions do not repeal themselves, they do not provide open-ended, infinite authorisations for the use of force. They will expire when the perceived problem has been dealt with. Following the Bush interpretation could potentially permit action against Iran, Syria or any other member state that have previously been the subject of Security Council demands. Catherine Denis points out, to allow states to rely on Resolutions for an indeterminate time will undermine the very spirit of the Charter. A situation of potentially permanent conflict would be created88. Furthermore, Oscar Schacter has argued that in fact Resolution 678 is no more than an affirmation of the collective self-defence doctrine89. Resolution 68790 imposed obligations upon Iraq. They have complied with the following demands. Firstly, they have rescinded annexation of Kuwait91. Secondly, in accepting the Resolution 687, they have accepted liability in principle. They also began to return Kuwaiti property. This Resolution also outlined Iraq's ceasefire obligations. Dinstein has argued that the maintenance of this ceasefire and the lack of a formal declaration of peace means that in fact this war is continuing toady, thus there is no need for the United States or the United Kingdom to offer further justifications for their actions. Dinstein's view is very much the minority view. The Alliance argued that the material breach arose from their non-compliance with the inspection and destruction of WMD programmes. In 1998, Sadaam Hussein demanded that the weapons inspectors leave the country. At the adoption of the Resolution, India expressed their objection that this would confer the power to take unilateral action in order to enforce previous Security Council Resolutions92. The Yemeni representative argued that he found that the possible use of force was excessive when founded on such minor legal technicalities93. ...read more.