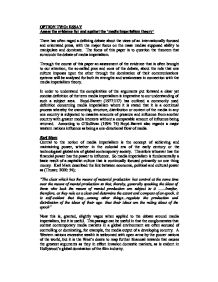 Assess the evidence for and against the 'media imperialism theory'

OPTION TWO: ESSAY Assess the evidence for and against the 'media imperialism theory' There has often raged a defining debate about the vices of an internationally focused and orientated press, with the major focus on the mass medias supposed ability to manipulate and dominate. The focus of this paper is to question the theorem that surrounds the debate of media imperialism. Through the course of this paper an assessment of the evidence that is often brought to our attention, the so-called pros and cons of the debate, about the role that one culture imposes upon the other through the domination of their communications systems will be analysed for both its strengths and weaknesses in connection with the media imperialism theory. In order to understand the complexities of the arguments put forward a clear yet concise definition of the term media imperialism is imperative to our understanding of such a subject area. Boyd-Barrett (1977:117) has outlined a commonly used definition concerning media imperialism where it is stated that it is a continual process whereby the ownership, structure, distribution or content of the media in any one country is subjected to massive amounts of pressure and influence from another country with greater media interests without a comparable amount of influence being returned. According to O'Sullivan (1994: 74) Boyd-Barrett also regards a major western nations influence as being a one-directional flow of media. ...read more.

As Branston and Stafford (1999) point out, a lot of the profits of an American television series can be made from the revenue that can be obtained through international purchase. The series will, even if successful, probably only recoup the initial outlay that was spent on production costs after it has been distributed in the Northern American continent. So the series will then be offered to every broadcaster in the world at varying prices. This price variation is based upon the perceived audience size that it may reach, but in less affluent countries such as Africa the cost results in the series being virtually given away for nothing. This is not to be seen as a charitable action from the media company that sells the series but as an indication that they will take any amount of money, as effectively they are continually making a profit as they recouped the production costs even before international distribution took place. Due to the extremely cheap price that the series costs, station managers cannot afford not to purchase it. This though has a detrimental effect on local production, as producers cannot make programmes of the same quality and at the unbelievably cheap price, as that of the American series (Branston & Stafford: 1999: 256-257). Training is another key element. Local producers of media output in areas of Africa rely upon the expensive training being done in Northern America and Europe (most notably ...read more.

Colin Davis an executive producer at MCA TV, an American network channel, argues that the distribution of popular American programmes such as the 70's classic Kojak, a cop classic starring Telly Savalas, was never going to endanger foreign cultures. He believed that if a programme, with its most famous line being 'Who loves ya baby?', could endanger your culture then you've got problems with your culture to begin with. Conclusion Through these points I hopefully have given a small indication of what the arguments for and against the media imperialism debate are all about. Generally the criticism is levelled at the most dominant world force, America. It is true that during the whole of the 90's the Americans have sought to eliminate the international trade barriers that exist worldwide in order to capitalise on the possible financial rewards available. There may in the future be massive benefits from the weaker nations use of western orientated material, but that is far from clear. It is extremely debateable whether access to western media content is detrimental, as essentially everyone has a choice in the way that they act and the attitudes and beliefs that they chose to adopt. So in effect there will only be a negative effect on the culture of third world, developing or weaker nation if the people who are part of that culture let it slip away (Hutchinson: 1999: 200). ...read more.