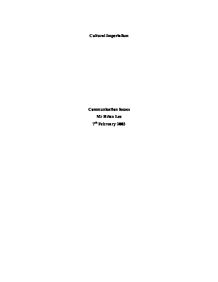 Cultural Imperialism Communication Issues Mr Brian Lee 7th February 2003 Part 1 Television programmes: Moulmein High (local) VS Smallville (imported) Moulmein High and Smallville both have a target audience that consist predominantly of teenagers. Both the programmes cover issues regarding friendship and love - two issues that teenagers often grapple with. Moulmein High is a show about a group of secondary students and their constant struggle with teenage woes. The show tries to reflect the way society perceives today's teenagers to be. Singaporean teenagers are viewed as being very open-minded with a strong preference for Western culture instead of their traditional Asian culture. The characters in the show reflect that very well by trying to speak with a slight American lilt, using American colloquial and dressing (in clothing other than their school uniform) like a typical American teenager. Smallville on the other hand, is an adaptation of the age-old classic Superman. Every episode shows how the main character, Clark Kent tries to find balance between leading a normal life, and using his special gift to save people in need. Surprisingly, Smallville is different as compared to typical American teenage programmes in its definition of beauty. ...read more.

Although I personally disagree with that fact, the typical Oriental beauty is one that is petite, fair and bestowed with exquisitely small and defined features. Part 2 a) Cultural imperialism happens when a powerful or stronger nation believes its culture to be 'the right and only one'. This results in the imperial nation pushing her culture and influencing another weaker nation to adopt it. Culture imperialism can happen by force, i.e. in the case of military imperialism, for example, when the English wanted to eliminate the use of native languages like Welsh. Culture imperialism can also happen just by the stronger nation's dominant influence for example in Taiwan, where all things American are considered popular. Although cultural imperialism can happen with force or at the own free will of the weaker country, it originated from military imperialism. It happened when the stronger empires conquered the weaker ones and forced their culture on them. As stated in the previous week's notes, culture "should be based on shared memories and a sense of continuity between generations". Culture imperialism is the exact opposite of that statement. Furthermore, cultural imperialism can create resistance between people or lower an individual's self-esteem. ...read more.

Therefore, although the Internet can be an aide in cultural imperialism, it cannot be a source. Information on the web is too varied and there does not seem to be a particular culture or country that dominates it. For example, a search on Western pop culture could generate many websites devoted to it. It could also generate as many websites bad mouthing pop culture. As for satellite television, there are many shows on cable from India, Taiwan, Australia and Hong Kong. Although the more popular channels may be from America, like the premium movie channels, it is not evident that cable is being dominated by Western culture and movies. Furthermore, there will always be a digital divide and a divide between the rich and the poor. This fact shows that even in a particular community, not everyone will have access to the information and the influence of Western culture. The Internet is a communication tool that is hard to control therefore making it impossible to dominate. Satellite television on the other hand allows smaller countries to produce their own movies and shows for sale and to air on cable. To conclude, I feel that new media cannot be a source of cultural imperialism. ...read more.