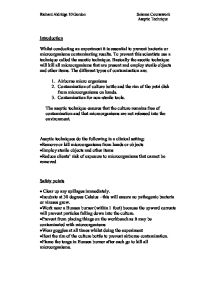 Basically the ascetic technique will kill all microorganisms that are present and employ sterile objects and other items. The different types of contamination are:

Then flame the inoculating loop in the roaring blue flame to ensure sure that it is free of any micro organisms from past experiments will may contaminate culture. 4. Also flame the neck of the bottle for the same reason 5. Insert loop into the bottle of yeast for 10 to 15 seconds 6. Remove loop, there should be a thin film of yeast culture in the loop 7. Lift lid of agar plate ajar (be careful when doing so to avoid airborne contamination) just high enough to fit loop inside the plate 8. Streak the plate with the yeast culture upon the loop in a zigzag pattern 9. Close the lid of the agar plate, then seal it with four pieces of sellotape, also add your name and date so that it is recognisable. ...read more.

prevent that the culture grown is free of contamination but there also wont be any micro organisms let out into the environment. Strengths and weaknesses and industrial procedures The only weakness with this technique is that it is quite hard to prevent the yeast culture from contamination. In a clinical setting the aseptic technique would be useful because it would reduce the medics' risk of exposure to infectious blood or tissue, it would also decrease the likelihood of micro organisms entering the body during clinical procedures. If a sterile environment were maintained then the risk of contamination would be low. Results With this starter culture you can clearly see the zig zag shape that was streaked using the yeast culture upon the inoculating loop. Richard Aldridge 10 Gordon Science Coursework Aseptic Technique ...read more.