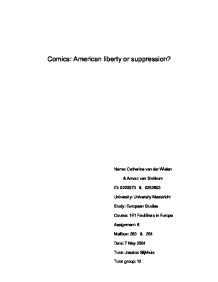 Comics: American liberty or suppression? We the People of the United States, in Order to form a more perfect Union, establish Justice, insure domestic Tranquility, provide for the common defence, promote the general Welfare, and secure the Blessings of Liberty to ourselves and our Posterity, do ordain and establish this Constitution for the United States of America. (http://www.house.gov/Constitution/Constitution.html). The identity of the free American people was not just secured in its constitution. When Europe discovered the New World by the end of the fifteenth century, the dream and fantasy of it being a free world was deeply entrenched in its identity at that time. After this Europe started to colonize the land, as it colonized many parts of the globe. A significant question in cultural discourse now, as "America has irresistibly moved toward center stage" (Kroes, 1996, p. 171), is whether America is now colonizing and dominating Europe by a process called Americanization or MacDonaldization. The MacDonaldization thesis is adhered by those who believe America is replacing traditional European culture by its own standards. Comic books can be considered an embodiment of American culture. So are European comics suppressed by American culture, or are they kept free to form a particular identity itself, as the liberal country of the United States of America would logically pledge for? What is the MacDonaldization thesis? Ritzer defines it this way: "The process by which the principles of the fast-food restaurants are coming to dominate more and more sectors of American society as well as of the rest of the world" (Ritzer, 1993, p.1). ...read more.

believes American culture has become "unavoidable" (p.173) today and we have no choice other than letting the flow of its products affect us (p.177). Ritzer, by noting "America will become virtually everyone's 'second culture'" (1998, p. 89) would agree with him. Pells forms an opposition to both as he adheres to the view that America has not culturally dominated the world so far that it can possibly have resulted in a global American replica, instead he argues the other way (2002). Whether the United States of America is dominating the world culturally will not be questioned here. The dispute will be if the world of comics is dominated by America, or not. Comics...? Comics have existed for ages and have developed extensively, especially over the last century. The history of comics has had a boost after World War II as the popularity of comics increased sharply. People had more leisure time and most important: more money to afford luxury products such as comic books. Although cartoons can be seen as luxury goods, it also had other functions in society over time. The fun part of reading comic strips is likely to be seen as one of the most important features to their readers, nevertheless, most cartoons also have a message to share with their reader. Comics need to be defined as the medium it is, as it has a deeper meaning than just the object, be it a comic book or a comic strip. ...read more.

To Conclude... Comic books has strongly stabilized its position as an artifact of nowadays culture; it can even be considered a mass media communication asset. Although comics are mainly intended as leisure, very often they contain a message for the reader. Comic books are very popular by the youth, who see them as an ideal object for hours of fun. Typical fact is that, nowadays, more and more grown-ups like to read a comic strip as well. This has been quite different during history, as comics were seen as a bad influence that America brought along with the MacDonaldization of the world. Where the youth loved comics, the parents and politicians opposed to it, which made it even more interesting for the youth to keep reading them. An own subculture of comic books was created by the youth, the underground comics. The view of the parents and politicians on American mass culture improved over time as they learned to accept the culture. Also, it became obvious that America was by far the only producer of comic books, and therefore could no longer be associated with American culture as such. Comics today are created all over the world and for this reason are not part of the MacDonaldization. The production of comic books in the Westernized world (Asia, Europe and America) can be seen as a joint venture of the coherent cultures. European comics are obviously not dominated by the Americans, but have an own identity and role in the world of comics. Nowadays comic books are accepted in our cultural society and have even become the subject of academic empirical research. ...read more.