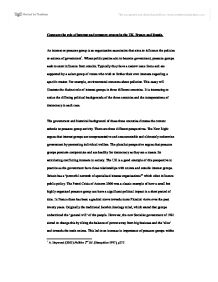 Compare the role of interest and pressure groups in the UK, France and Russia.

Compare the role of interest and pressure groups in the UK, France and Russia. An interest or pressure group is an organisation association that aims to influence the policies or actions of government1. Where politic parties aim to become government, pressure groups seek to exert influence from outside. Typically they have a narrow issue focus and are supported by a select group of voters who wish to further their own interests regarding a specific matter. For example, environmental concerns about pollution. This essay will illustrate the distinct role of interest groups in three different countries. It is interesting to notice the differing political backgrounds of the three countries and the interpretations of democracy in each case. The government and historical background of these three countries dictates the current attitude to pressure group activity. There are three different perspectives. The New Right argues that interest groups are unrepresentative and unaccountable and ultimately undermine government by promoting individual welfare. The pluralist perspective argues that pressure groups promote compromise and are healthy for democracy as they are a means for articulating conflicting interests in society. The UK is a good example of this perspective in practice as the government have close relationships with unions and outside interest groups. Britain has a "powerful network of specialised interest organisations"2 which often influence public policy. The Petrol Crisis of Autumn 2000 was a classic example of how a small but highly organised pressure group can have a significant political impact in a short period of time. ...read more.

The large organisations which are in place for unions are often internally divided creating more problems for the French system. Similarly, Russia is hindered by poorly organised and incoherent interest groups. Pressure groups with strong links to the Soviet-party state often perpetuate influence. Other groups are notoriously weak and find difficulty gaining support due to the restrictions placed on the media. Corporatism is a "relationship between the state and interest groups in which major decisions on domestic matters emerge from discussion between the government and a few peak associations."5 In return for their influence these favoured groups are expected to ensure the compliance of their members. Russian pressure groups are well known for internal influence and corruption of the government. The separation between public and private sectors, so central to the organisation of interests in the West, has not emerged in this democracy and this has led to an unnatural balance of power. Many private entrepreneurs compete for wealth which can be extracted from previously state-owned industries. Although Trade Unions have broad membership, they are co-opted by management and government and avoid direct links with non-governmental political parties. This means they are limited in their influence and can be quickly overruled by more influential players such as the financial industrial groups. The government allows tacit abuse of union power if it means they will gain support. In France there have been a limited number of examples of corporatism between unions and government. ...read more.