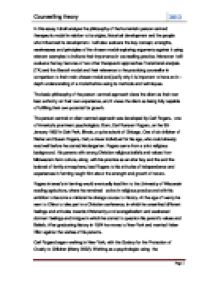 Counselling theory. In this essay I shall analyse the philosophy of the humanistic person centred therapeutic modal in relation to its origins, historical development and the people who influenced its development

In this essay I shall analyse the philosophy of the humanistic person centred therapeutic modal in relation to its origins, historical development and the people who influenced its development. I will also evaluate the key concept, strengths, weaknesses and principles of the chosen modal exploring arguments against it using relevant examples to indicate their importance in counselling practice. Moreover I will evaluate the key features of two other therapeutic approaches Transitional analysis (TA) and the Gestalt modal and their relevance to the practicing counsellor in comparison to their main chosen modal and justify why it is important to have an in-depth understanding of a modal before using its methods and techniques. The basic philosophy of the person centred approach views the client as their own best authority on their own experience, and it views the client as being fully capable of fulfilling their own potential for growth. The person centred or client centred approach was developed by Carl Rogers, one of America's prominent psychologists. Born, Carl Ransom Rogers, on the 8th January 1902 in Oak Park, Illinois, a quite suburb of Chicago. One of six children of Walter and Susan Rogers, Carl, a clever individual for his age, who could already read well before he started kindergarten. Rogers came from a strict religious background. His parents with strong Christian religious beliefs and values from Midwestern farm culture, along with his practice as an altar boy and the and the isolated of family atmosphere, lead Rogers to his attitudes of independence and experiences in farming taught him about the strength and growth of nature. Rogers interest's in farming would eventually lead him to the University of Wisconsin reading agriculture, where he remained active in religious practice and with his ambition to become a minister he change course to History. At the age of twenty he went to China to take part in a Christian conference, in which he unearthed different feelings and attitudes towards Christianity and evangelicalism and awakened dormant feelings and intrigue in which he started to question his parent's values and Beliefs. ...read more.

A frequent criticism of the person-centred approach is that delivering the core conditions is what all good therapists do anyway, before they move on to applying their expertise and doing the real work of 'making clients better'. There are many criticisms of the person centred approach which include: * That its effectiveness it is difficult to measure as there are no predefined outcomes. * That there is only limited empirical research to measure the effectiveness of this approach * Therefore it is not possible to have strict time limits on the number of sessions. * It does not offer advice or guidance, which is what the client may be looking for. * If the single basic motivating drive that an organism has is to self-actualisation, then this natural process should not require a counsellor or a helper. It can be said that Client-Centered therapy is built around attitude. It is the psychologists attitude which shapes therapy, and not any specific technique. This is one of the major differences between Client-Centered therapy and other forms of therapy. Basically, the Client-Centered therapist seeks to release the potential within the client, and not to solve problems for them. Transactional Analysis: "The main philosophies of TA include the belief in the intrinsic value of all people I'm okay - you're okay, that people are responsible for their own thoughts, feelings and behaviour, a person's own experiences is of prime validity and that each person constructs and decides their own destiny, and can change those decisions" http://www.functionalfluency.com/articles_resources/Philosophy_Principles_Practice.pdf. These philosophies are in accord with the person centred model in terms of that each individual should be viewed with UPR and that he/she is the best authority on him/her self and thus has the ability to self actualise. T A was pioneered by Eric Berne, born May 10, 1910 in Montreal, Quebec, Canada, as Eric Leonard Bernstein son of David Hiller and Sarah Gordon Bernstein and the founder of Transactional Analysis. ...read more.

* Clients may be "put off" by a focus on catharsis. * Clients may believe that to show one's vulnerability is to be weak. * Ineffective therapists may manipulate the clients with powerful experiential work * Some people may need psycho-education. Person centred, in practice is centred in the client as an individual. Desktop therapy is essentially relational. This is of course a difference in emphasis and either approach excludes either the individual or the relationship." There are many dangers of using techniques without adequate training, for both a counsellor and the client. The dangers for the counsellor are: * Litigation. (complaints) * Loss of licence. * suspension of membership of a professional body e.g. BACP. * Loss of job. * Damage credibility of the individual/profession. * Bring the profession into disrepute. * Bad press. * Lose respect of colleagues. * Lose future/current clients. * Could have a detrimental effect on the council's confidence. * Leave the counsellor feeling guilty. The dangers for the client to include: * Give the client a false sense of security. * Physical danger. * Psychological distress/emotional. Could lead to depression, suicide. * Increased anxiety. * Loss of trust in counselling therapy. * resentment and anger. * Create additional psychological problems. While conducting a counselling session remember to always: * Demonstrate professionalism and maintain rapport throughout the session. * Convey to the client that his or her confidentiality will be strictly protected. * Speak with the client at his or her level of understanding. * Clarify important misconceptions but avoid extended talk. * Stay organized and avoid counselling outside the protocol's structure. * Avoid collecting data about the client during the counselling session. The principles of counselling are easy to learn but difficult to apply and service providers can easily make mistakes, such as the following: * Controlling. * Judging. * Moralizing, preaching, and patronizing. * Labelling. * Making light of the client's own version of a problem. * Not accepting the client's feelings. Anyone can call themselves a counsellor. They do not need qualifications or any form of training within this specialised field. ...read more.