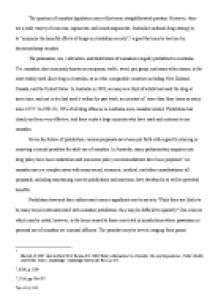 ﻿The question of cannabis legislation may at first seem straightforward question. However, there are a wide variety of concerns, arguments, and counterarguments. Australia's national drug strategy is to ?minimize the harmful effects of drugs on Australian society?,[1] a goal that may be best me by decriminalising cannibis. The possession, use, cultivation, and distribution of cannabis is legally prohibited in Australia. Yet, cannabis, also commonly known as marijuana, reefer, weed, pot, ganja, and many other names, is the most widely used illicit drug in Australia, as in other comparable countries including New Zealand, Canada, and the United States. In Australia in 1993, as many as a third of adults had used the drug at some time, and one in ten had used it within the past week, an increase of more than three times as many since 1973.[2] In 1991-92, 70% of all drug offences in Australia were cannabis related. Prohibition has clearly not been very effective, and there exists a large minority who have used and continue to use cannabis. Given the failure of prohibition, various proposals have been put forth with regard to relaxing or removing criminal penalties for adult use of cannabis. In Australia, many parliamentary inquiries into drug policy have been undertaken and numerous policy recommendations have been proposed.[3] As cannabis use is a complex issue with many social, economic, medical, and other considerations, all proposals, including maintaining current prohibitions and sanctions, have drawbacks as well as potential benefits. ...read more.

Unfortunately, the issue is not as straightforward as some proponents might claim. Eliminating the black market would require a supply of cheap, legal cannabis, limiting the government's flexibility and control with regard to taxing the product.[9] It is well established that cheap, plentiful supply generally leads to increased consumption[10], which would, necessarily, lead to increased public health risks. Additionally, proponents of legalisation sometimes argue that the cost of prohibition to society is high and that it would be reduced by legalising cannabis. However, it is likely that costs would be the same, or even higher.[11] Regardless of the full or potential costs to society, at this time there is a lack of widespread community support for cannabis legalisation and a corresponding lack of political will to legalise cannabis.[12] A less radical and more flexible ?middle ground?, and one which has been tried in numerous countries and regions including several Australian territories and states, is to enact some form of cannabis decriminalisation. Although specifics vary from jurisdiction to jurisdiction, decriminalisation is a framework in which cannabis remains technically illegal, but penalties for personal use are relaxed or eliminated, replaced with fines or mandatory drug education. Under most such schemes, production and distribution of commercial quantities of cannabis remain criminal acts. South Australia, the Australian Capital Territory (ACT), and the Northern Territory of Australia have adopted decriminalisation policies toward personal cannabis use.[13] A study of the effects wrought by the 1987 adoption of South Australia's Cannabis Expiation Notice (CEN) ...read more.

and punitive measures to deter people from using cannabis, as well as the implied rights of adults in a free society to decide for themselves and choose what they wish, whether or not it is good or bad for them. To quote Michael Dennis and William White, ?Marijuana is neither a wonder drug or the root of all evil. It is widely used, has some viable uses, has some negative consequences, and will have substantial costs to society whether marijuana is legalized or not.?[20] Since available evidence indicates that decriminalisation does not lead to significantly increased cannabis use and policing the personal use of small amounts of cannabis may be characterised as a waste of resources which would be better spent elsewhere, decriminalisation seems to be the most reasonable policy to adopt. Indeed, this was the general recommendation of a number of parliamentary inquiries, including the Baume Committee, the Cleeland Commission, the New South Wales Joint Parliamentary Committee upon Drugs, the South Australian Royal Commission into the Non-Medical Use of Drugs, the Australian Capital Territory (ACT) Legislative Assembly Select Committee on HIV, Illegal Drugs, and Prostitution, and the Victorian Premier's Drug Advisory Council.[21] We must conclude that these many commissions and inquiry boards offer a viable alternative policy to the current criminal prohibition still operating throughout most of Australia. Decriminalising personal use of cannabis would almost certainly not increase harm to any great degree and is in line with Australia's national drug policy of harm reduction. ...read more.