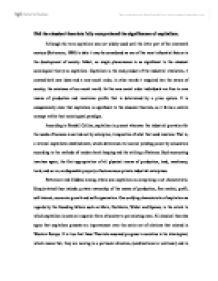 Did the classical theorists fully comprehend the significance of capitalism.Although the term capitalism was not widely used until the latter part of the nineteenth century

Did the classical theorists fully comprehend the significance of capitalism. Although the term capitalism was not widely used until the latter part of the nineteenth century (Bottomore, 1988) to date it may be considered as one of the most influential factors in the development of society. Infact, no single phenomenon is as significant to the classical sociological theory as capitalism. Capitalism is the end product of the industrial revolution; it created both new ideas and a new social order, in other words it enquired into the nature of society, the existence of our social world. In this new social order individuals are free to own means of production and maximize profits that is determined by a price system. It is unequivocally clear that capitalism is significant to the classical theorists, as it forms a central concept within their sociological paradigm. According to Randall Collins, capitalism is present wherever the industrial provision for the needs of humans is carried out by enterprise, irrespective of what that need involves. That is, a rational capitalistic establishment, which determines its income yielding power by calculation according to the methods of modern book keeping and the striking of balance. Such accounting involves again, the first appropriation of all physical means of production; land, machinery, tools, and so on, as disposable property of autonomous private industrial enterprises. Bottomore and Giddens among others saw capitalism as comprising a set characteristic. Simply stated they include: private ownership of the means of production, free market, profit, self-interest, economic growth and self-organization. One unifying characteristic of capitalism as regards by the founding fathers such as Marx, Durkheim, Weber and Spence, is the extent to which capitalism is seen as a superior form of society to pre-existing ones. All classical theorists agree that capitalism presents an improvement over the entire set of relations that existed in Western Europe. It is true that these Theorists assumed progress in societies to be teleological, which means that, they are moving in a particular direction, (unidirectional or unilinear) ...read more.

Weber also examines the difference between a 'market economy' and a 'planned economy', in order to clarify the specific character of capitalist rationality, partly as an element in his critical view of the possibility of socialism. Weber saw the possibility of a bleak future for societies that did not temper capitalism with the development of the human spirit. Fuelled originally by religious asceticism and supported by rational, scientific thought. Weber feared that "the spirit of religious asceticism" would eventually disappear from capitalist culture leaving capitalism resting purely on rational and scientific foundations. Of course, Weber understood the significance of capitalism. He realized that concealed beneath the banner of 'capitalism', the 'most fateful force in our modern life as he called it, are a variety of fairly different characteristics. "Capitalism ( feudalism, mercantilism, socialism, and so on) can only be a pure or 'ideal type, not a real entity, that are constructed from complex events for analytic purposes". As production for a market, capitalism had appeared elsewhere in history; more specifically in ancient Rome. As entrepreneurial activity aimed at amassing savings, it achieved prominence in the Italian city-states of the Renaissance (Stones, 1998). From Weber's perspective his inquiry into the capitalist world order elaborated for the most part a historical thesis. Although aware of its implications for the present and future; what really does this thesis mean for us today, centuries after the reformation and the scientific revolution of the enlightenment? (Stones, 1998). The main similarity between the spirit of capitalism and the ethic of Protestantism are that both require the application of systematic self-discipline in economic activities and both view the fulfillment of one's occupational responsibilities as something that is morally worthy. Capitalism requires that workers proceed in a disciplined and systematic way about his task, whilst the Protestant ethic leads him to exercise similar self-control in order to sustain his somewhat fragile conviction of his own salvation. Capitalism regards work as something entirely good, people ought to do it if they're upright citizens. ...read more.

Rationality, or too much of it, can have irrational consequence as ideal and values of freedom and humanity can suffocated under the weight of demands for efficiency and calculability particularly within the capitalist market place. As a result of its own workings, capitalism transforms itself 'from within'. By this I mean it is poised for continuous discussion, and as such is unquestionably significant to the classical theorist and likewise the entire sociological construct. Notwithstanding this, criticisms exist as the classical theorists write from different social and historical vantage points. In concluding it is evident that capitalism is important because it forms the central concept within the Classical Sociological paradigm. All Classical theorists based their discussion on an assumption of the existence of capitalist society, thus they all describe and analyze the same type of society. As it relates to the question of this essay, in less complicated terms, (like if I was asked this question in class by Dr. Taylor), I would simply respond; Yes! Classical theorists fully comprehend the significance of capitalism and not only do they understand it, but to go a bit further one may argue that their very existence within the sociological academic was created on the basis of their preoccupation with capitalism. (No wonder it is important to them). Reference Bottomore, Tom. (1988). Theories of Modern Capitalism. London, Boston: G. Allen & Unwin. Collins, Randall. (Eds.). (1994). Four sociological traditions: selected readings. New York: Oxford University Press. Durkheim, Emile. (1984). The division of labor in society. New York: Free Press. Giddens, Anthony. (1973) Capitalism and modern social theory; an analysis of the writings of Marx, Durkheim and Max Weber. Cambridge, England: University Press. Macionis, J., & Plummer, Ken. (1998). Sociology. New York: Prentice Hall. McIntosh, Ian. (Eds.). (1997). Classical sociological theory: a reader. Washington Square, N.Y.: New York University Press. Ritzer, George. (1992). Contemporary sociological theory. New York: McGraw-Hill. Stones, Rob. (Eds.). (1998). Key sociological thinkers. Hampshire: Macmillan Press. Taylor, Orville. (2003). IDEAZ. Kingston: Arawak Publishers Webber, Max. (1930). The Protestant ethic and the spirit of Capitalism. London: G. Allen & Unwin Ltd. ...read more.