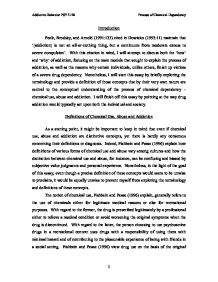 Discuss both the 'how' and 'why' of addiction, focusing on the main models that sought to explain the process of addiction, as well as the reasons why certain individuals, unlike others, finish up victims of a severe drug dependency.

Introduction Peele, Brodsky, and Arnold (1991:133) cited in Dowieko (1993:11) maintain that '[addiction] is not an all-or-nothing thing, but a continuum from moderate excess to severe compulsion'. With this citation in mind, I will attempt to discuss both the 'how' and 'why' of addiction, focusing on the main models that sought to explain the process of addiction, as well as the reasons why certain individuals, unlike others, finish up victims of a severe drug dependency. Nonetheless, I will start this essay by briefly exploring the terminology and provide a definition of those concepts that by their very own nature are central to the conceptual understanding of the process of chemical dependency - chemical use, abuse and addiction. I will finish off this essay by pointing at the way drug addiction would typically act upon both the individual and society. Definitions of Chemical Use, Abuse and Addiction As a starting point, it might be important to keep in mind that even if chemical use, abuse and addiction are distinctive concepts, yet there is hardly any consensus concerning their definitions or diagnosis. Indeed, Fishbein and Pease (1996) explain how definitions of various forms of chemical use and abuse vary among cultures and how the distinction between chemical use and abuse, for instance, can be confusing and biased by subjective value judgments and personal experience. Nonetheless, in the light of the goal of this essay, even though a precise definition of these concepts would seem to be unwise to proclaim, it would be equally unwise to prevent myself from exploring the terminology and definitions of these concepts. The notion of chemical use, Fishbein and Pease (1996) explain, generally refers to the use of chemicals either for legitimate medical reasons or else for recreational purposes. With regard to the former, the drug is prescribed legitimately by a professional either to relieve a medical condition or avoid worsening the original symptoms when the drug is discontinued. ...read more.

Although many are those who regard the distinction between recreational drug use and problematic drug use as essential, on the other hand, Parker et al.'s model conceives of the boundaries between recreational and problematic drug use as becoming ever more blurring as a result of the changing patterns and settings of drug use behaviour. For this reason, as reflected in their model, they prefer to think of a continuum of drug use behaviour, which involves pathways, careers and journeys rather than moving from soft or recreational drug use to hard drug use. Models of Chemical Dependency After discussing some of the main models on the process of chemical dependency, I will now consider the potential of the main models of chemical dependency to explain why certain individuals, unlike others, proceed from little or no use of substances or involvement in an activity to an increased intake and finally to full blown addiction. The three most important theoretical models through which one can set about explaining chemical dependency are the biological, the psychological, and the socio-cultural models. Biological models postulate innate, constitutional physical mechanisms in specific individuals that impel or influence them either to experiment with drugs or to abuse them once they are exposed to them. Thombs (1994) explains how, within the medical model, addiction is often described as a primary disease; that is, it is not the result of another condition. This is usually taken to mean that the disease is not caused by drug use, heavy drinking, stress, or psychiatric disorders; rather, Thombs (1994) explains, it is thought to be the cause of these very conditions. In other words, drug use is a secondary symptom or manifestation of an underlying disease process known as addiction. The enduring value of this model is that it removes alcohol and other drug addictions from the moral realm, thus proposing that addiction sufferers should be treated and helped. ...read more.

Also, Goode (1999) stresses that youngsters do not magically and independently devise a solution to a psychological problem they may have, and rush out, looking for a chemical substance to alleviate that problem. Future users turn to drugs because they have friends who use and endorse use, and because they are relatively isolated from circles who do not use and who in fact actively discourage use. However, despite what some theorists argue, Goode (1999) points out, 'the validity of one theoretical perspective does not imply the falsity of another'. All three models are likely to play their part in any individual's dependency, though one or two may be dominant for that person. Perhaps the most important thing to stress in conclusion is that addiction should not be regarded as a walled-off, stand alone 'condition'. In attempting to answer the question, "Why drug use?" Goode (1999) advices that we need to be broad and eclectic in our approach rather than limited and dogmatic. Chemical Dependency, the Individual and Society Chemical dependency is a major public health problem that affects millions of people and places enormous financial and social burdens on society. It destroys families, damages the economy, victimizes communities, and places extraordinary demands on the education, criminal justice, and social service systems. Chemical dependency affects and costs the individual, the family, and the community in significant, measurable ways including loss of productivity and unemployability, impairment in physical and mental health, reduced quality of life, increased crime, increased violence, abuse and neglect of children, dependence on non-familial support systems for survival, and expenses for treatment. The physical, mental health and social consequences of alcohol and other drug use by women can seriously affect their lives and those of their families. Not only are women, especially young women, beginning to close the gap between female and male consumption of alcohol and other drugs, they suffer earlier and more serious consequences. Women become intoxicated and addicted more quickly than men and develop related diseases earlier. Sadly enough, children also must bear the burden of biological and environmental consequences of parental substance abuse. ...read more.