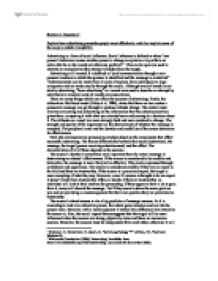 Explain how advertising persuades people most effectively, and also explain some of the ways in which it might fail.

Section A, Question 2 Explain how advertising persuades people most effectively, and also explain some of the ways in which it might fail. Advertising is a form of social influence. Social influence is defined as when "one person's behaviour causes another person to change an opinion or to perform an action that he or she would not otherwise perform".1 This can be open (as used in adverts) or manipulative (the attempt is hidden from the target). Advertising is all around. It is defined as "paid communication through a non-personal medium in which the sponsor is identified and the message is controlled" 2Advertisements can be made from all sorts of sources, from individuals to large companies and are made usually through the media. Although word of mouth is not strictly advertising, "buzz advertising" is a recent term used to describe an attempt by advertisers to simulate word-of-mouth communications. There are many things which can affect the success of advertising. Firstly, the elaboration likelihood model (Petty et al, 1986), states that there are two routes a persuasive message can go through to produce attitude change. The central route involves evaluating and elaborating on the information that the advertisement has given them, comparing it with what you already know and coming to a decision about it. The attitudes as a result are more strongly held and more resistant to change. The strength and quality of the arguments are the determinants of whether the message is accepted. The peripheral route and the identity and credibility of the source determine its effectiveness. Next, the communication persuasion paradigm displays the components that affect successful advertising. The theory differentiates between the source (advertiser), the message, the target (person receiving advertisement) and the effect. The characteristics of all of these depend on the success. The source's identity is sometimes more important than the actual message in determining an adverts' effectiveness. If the source is considered to be credible and believable, the message is more likely to be effective. ...read more.

3The basis is that humans are motivated to not only survive, but to pass on their genes to future generations, and their social behaviour reflects this desire. One area of evolutionary theory that has recently received much interest is mate selection. The theory states that humans have an evolved disposition to have relationships with healthy individuals and therefore produce healthy children who will successfully mate and pass on the genetic code to future generations. Thornhill and Grammar (1999) state that we prefer attractive individuals because physical attractiveness portrays inner healthiness. Beautiful people therefore have high reproductive potential. Women like strong features such as a strong jaw whereas men like childlike facial features (portraying youth) and curves, as hips suggest high nutritional status and child bearing capabilities (Thornhill and Gangestad, 1993). However, different cultures and generations have found different things attractive. Physical attractiveness isn't the only influence that determines successful mating. Males look for youth and a caring nature because these characteristics allow the male more time to reproduce. Also the younger the female is, the more chance the offspring will survive. Females on the other hand look for money, strength and stability because she needs the resources to support herself and the child (Buss 1994). The age of the male isn't important because he can reproduce for most of his life. These preferences will continue to dominate the population because it promotes successful mating. However, some studies contradict this theory. Buss and Barnes (1986) surveyed American college women and found that they rated kindness in a male as more important than any other trait. As kindness bears no connection to resources or strength, evolutionary theory cannot explain this finding. Although homosexuality counteracts the theories of the evolutionary perspective because homosexuals cannot pass down their genes, it does try to explain homosexuality with reference to recessive genes in the population that actually cause a reproductive advantage because they can help look after relatives' children. ...read more.

Then, their rival applicant arrived (a confederate) and was either dull with poor personal hygiene or smart and confident. After the interview they were given the same questionnaire to fill out again. People waiting with the dull rival reported higher levels of self-esteem on the second questionnaire than did the people waiting with the smart rival. A person's level of self-esteem depends on their expectations. Often people with high self-esteem look at everything they do positively and expect to do good things. However, people with low self-esteem think negatively and expect people to confirm this. This is called self verification. People often have certain techniques to maintain their level of self-esteem, whether high or low. Firstly, they will manipulate appraisal through choosing to be around people who like them. Perhaps Mary has to be around people who don't like her or feels she is unworthy of nice friends. Also people are guilty of selective information processing. Mary may choose only to remember events which had a negative outcome rather than a positive one. Thirdly, people are selective in their social comparison. People with high self-esteem tend to compare themselves to average achieving individuals whereas Mary may be comparing herself to ideal she can't possibly achieve, and is experiencing self discrepancy. Finally, people are selective in their commitment to identities. Mary may place more importance on identities of hers which have a negative image by society, such as a smoker, or a single mother rather than the fact she is good at her job. In order for Mary to raise her self-esteem she must abandon her techniques of maintaining her low self-esteem and change them to techniques of keeping a high level of self-esteem. She must try to be around people who are positive about her or at least try to retrieve something constructive about a criticism. She could also stop setting her standards of her ideal self so high and accept what she is and what she may never be. Finally, she must concentrate on her positive identities or work on changing her negative identities into positive ones if she can. ...read more.