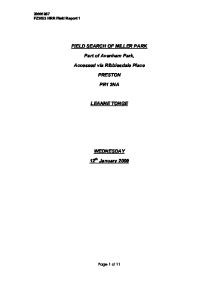 FIELD SEARCH OF MILLER PARK Part of Avenham Park, Accessed via Ribblesdale Place PRESTON PR1 2NA LEANNE TONGE WEDNESDAY 12th January 2009 CONTENTS Pg Aims 3 Objectives 3 Location 3 Methods 4 Results & Discussion 4 Evidence Collected 6 Witnesses 10 Bibliography 11 Aims To conduct an initial field search on site area 'A' at Miller Park, Preston. To look for any evidence of a disturbance or physical evidence from a crime being committed in the area. Objectives Record all features of the scene through diagrams, notes and photographs. Conduct a full search of the area and record any physical evidence found. Make contemporaneous notes of any evidence found including whereabouts, photos and significance. Come to a conclusion based on any evidence and signs of a disturbance. Location Avenham & Miller Park is located within walking distance from the busy city centre of Preston. The map below shows a regional map highlighting Preston in the north west of England (fig.1) and fig. 2 shows a local map positioning Avenham & Miller Park in the city of Preston (both maps courtesy of www.multimap.com). Fig. 1: Regional map of north west of England locating Preston in Lancashire. Fig. 2: Local map of Preston positioning Avenham & Miller Park in Preston city. The park is only 5 minutes from the train station and 10 mins from the bus station. From the main street in the centre of Preston, Fishergate, head down Chapel Street towards Winkley Square and onto Ribblesdale Place. ...read more.

in a clockwise direction along the river (south) and behind the rail track (west) meeting back at the start. Large shrubbery surrounds site 'A' making it easier for a suspect to hide and/ or dispose of any evidence or weapons. A deeper search of the underside of large shrubbery areas and the ponds may prove useful. A search in the evening to determine the visibility after dark. There are several street lamps, which are situated around the access roads, need to determine if working lamps or ornamental - provide better lighting and improve witness sightings. The Lancashire Evening Post (LEP) reported many crimes and the presence of gangs, creating an unsafe atmosphere and making the locals uneasy but since the �5 million regeneration last year these incidences have slightly subsided. It attracts many people and is surrounded by offices and residential homes. Many dog walkers, joggers, cyclists and pedestrians use the park to cut though to the city centre. The trains run frequently through Miller Park. There are known murders, child abduction, rape and muggings in this park but in the last year alone the LEP reported on 11/1/08 a teenager robbed at knife point in Avenham Park, 13/1/08 a 30 year old found stabbed at Miller Park and later died in hospital, 18/4/08 a 42 year old pregnant woman raped at Avenham Park. Lastly 15/1/09 a man was ordered to pay fine after assaulting taxi driver at Avenham Park in October 2008. This park, as with many parks are considered a high traffic area. ...read more.

The small holes are possibly where flowers were planted and since pulled out. The small holes have collected debris and leaves. The soil is compacted and washed smooth by the rain so likely to been dug up a while ago. Fig. 12: Disturbed soil mound previously been dug over. The rain has smoothed out the soil and leaves have collected in the small holes, suggesting dug up several weeks ago if not longer. Marked as EV5 on Fig. 3. Fig. 13: Close up of Fig. 12 showing leaves and smoothed soil. Vegetational changes were noticed south to site 'A' in the open field. There are three distinct square marks in the grass from what were previously flower beds, possibly (Fig. 14). Note the change in grass colour and the muddy borders. An aerial photo of the park taken from approx. five years ago show these were once flower beds (courtesy of Google maps). Aerial photographs at oblique lighting show many differences and patterns in the ground providing information on burial sites. Fig. 14: Picture of open field, south to site 'A'. The three black arrows show the three square outlines on a diagonal. Marked as EV6 on Fig. 3. In conclusion the evidence found at the scene has not provided any significant evidence of a crime. There are notable changes to the gardens that can provide clues and a possible starting point had there been a crime committed and more evidence found. A more thorough search amongst the large shrubs and ponds may have provided more information. ...read more.