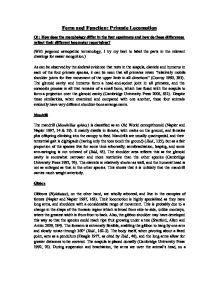 Form and Function: Primate Locomotion Q1: How does the morphology differ in the four specimens and how do those differences reflect their different locomotor repertoires? (With jargoned osteopathic terminology, I try my best to label the parts in the relevant drawings for easier recognition.) As can be observed by the skeletal evidence that rests in the scapula, clavicle and humerus in each of the four primate species, it can be seen that all primates retain "relatively mobile shoulder joints for free movement of the upper limb in all directions" (Conroy 1990, 383). The glenoid cavity and humerus form a head-and-socket joint in all primates, and the coracoids process is all that remains of a small bone, which has fused with the scapula to form a projection over the glenoid cavity (Cambridge University Press 2006, 631). Despite these similarities, when examined and compared with one another, these four animals evidently have very different shoulder-bone arrangements. Mandrill The mandrill (Mandrillus sphinx) is classified as an Old World cercopithecoid (Napier and Napier 1997, 14 & 19). It mainly dwells in forests, with males on the ground, and females plus offspring climbing into the canopy to feed. Mandrills are usually quadrupedal, and their terrestrial gait is digitigrade (having only the toes touch the ground) (Ibid., 135), but as a fair proportion of the species live for some time arboreally, semibrachiation, leaping, and some arm-swinging is not unheard of (Ibid, 45). ...read more.

A ball-and-socket joint is formed where the humerus joins the pectoral girdle. This only permits movement in a single plane (Campbell, et al. 2009, 610), but provides a base of support for the bones of the forelimbs (Ibid., 608). The clavicle is also well-developed, especially around both the acromial end articulating with the acromion process of the scapula, the sternal end with sternum. The acromial end of the clavicle also ends more dorsally, in line with the vertebral column. This is used for aiding with complex movements of the arms, providing it with universal movement of the humerus (Cambridge University Press 2006, 631). Last of all, there is an obvious bicipital/intertubercular groove, where the tendon of the biceps muscle passes (Ibid., 632). Q2: Although both the chimpanzee and the mandrill are walking on all fours, describe how their anatomy differs. What does this tell you about their evolutionary history? Looking at both species' skeletons, the back of the chimpanzee's back is much less pronounced and much rounder, while the mandrill has a fairly longer and narrow head. The frontal bones are slightly unfused in the mandrill, compared to the skeletal evidence of the chimpanzee. The nasal aperture is also broader in the chimpanzee, and the glabella (the part between the eyebrows and above the nose) ...read more.

As a percentage of total body weight, the upper limbs of humans are only 60% as heavy as those of chimps, whereas the lower limbs are nearly twice as heavy. This arrangement of body weight contributes to a more stable posture, since the center of gravity is lower in the pelvis (Ibid., 336-7). Special adaptations of the knee prevent over-extension of the leg when it swings forwards (Cambridge University Press 1992, 78). To support the excess body weight, the femoral condyles (bottom of the femur) coalesces in front (Brothwell 1972, 37), and is entirely enlarged, as is the tibia with which it articulates (Stanford, Allen and Ant�n 2009, 294). Foot In humans, perhaps the most obvious adaptation for bipedalism is the hallux (big toe) is aligned with the other digits of the foot (Cambridge University Press 1992, 77-8), so that the limbs are swung beneath the body and can be placed close to the line of travel without catching the projecting toe on the opposite leg (Kardong 2002, 343). The foot forms an arch, broadening the base of support upon which the upper body stands. If the arch were absent, extension of the ankle would not be as far (Kardong 2002, 343). The development of these transverse and longitudinal arches also helps to absorb shocks (Cambridge University Press 1992, 78). They store and return some of the energy during walking, and help to reduce the incidence of fatigue fractures to the biped's lower leg (Stanford, Allen and Ant�n 2009, 295). ...read more.