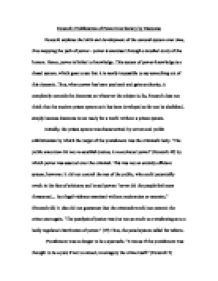 Foucault: Proliferation of Power into Society by Discourse. Modern punishment shifts the focus away from the violence itself and rather focuses on emphasizing to the criminal and the rest of society that those who break the law are not accepted in societ

Foucault: Proliferation of Power into Society by Discourse Foucault explores the birth and development of the carceral system over time, thus mapping the path of power - power is exercised through a detailed study of the human. Hence, power is linked to knowledge. This system of power-knowledge is a closed system, which goes to say that it is nearly impossible to say something out of this dynamic. Thus, when power has been produced and gains authority, it completely controls the discourse on whatever the subject is. So, Foucault does not think that the modern prison system as it has been developed so far can be abolished, simply because discourse is not ready for a world without a prison system. Initially, the prison system was characterized by torture and public exhibitionism by which the target of the punishment was the criminal's body. "The public execution did not re-establish justice; it re-activated power" (Foucault 49) by which power was asserted over the criminal. This was not an entirely efficient system, however. It did not control the rest of the public, who could potentially revolt in the face of arbitrary and brutal power: "never did the people feel more threatened... by a legal violence exercised without moderation or restraint." (Foucault 63) It also did not guarantee that the criminals would not commit the crime once again. "The paralysis of justice was due not so much to a weakening as to a badly regulated distribution of power." ...read more.

It also creates categories within society to place the criminal, and this is done through a distribution and creation of knowledge of human nature and behavior. Thus, punishment should be regarded as a social function as well as a political tactic, as it "make[s] the technology of power the very principle both of the humanization of the penal system and of the knowledge of man." (Foucault 23) Power has thus been re-distributed into more efficient means through better knowledge of the delinquent with laws better tailored to more efficiently punish. The new system was created with the pretense of discouraging people from crime, as well as to reform those who do commit crime. It aimed to discourage people from crime by portraying it as disadvantageous and therefore undesirable, by instilling an apprehension of the inevitability of punishment, by lateral effects into society so as to "leave the most lasting impression on the minds of the people," (Foucault 95) as well as through optimal specification of what is a criminal and what is a crime. The carceral system is "a great enclosed, complex and hierarchized structure that was integrated into the very body of the state apparatus." (Foucault 116) It develops as a way to control an observe the prisoner, as characterized by the power-knowledge dynamic. Control is thus the exertion of power, while observation is the process of gathering knowledge of the prisoner and of "a closer penal mapping of the social body." ...read more.

In doing so, however, power diffuses through these institutions and into the rest of the society. It would be impossible to take the penal system out of society simply because it has been so ingrained into society - while society focuses on liberty, the obvious punishment would be to deny liberty and that is what the carceral system is about. Thus, discourse does not allow for changes in the system - humans determine the values of a culture as well as the rules of a culture, and only they can unmake them. This is not a process that happens immediately or even quickly - it is a slow process of development and redistribution over time. If anything, the modern system of punishment has ensured greater successes in ensuring liberty for others as well as to enforce order - there cannot be imagined a more efficient system within the present discourse of punishment. Furthermore, to want to change the system would be to question power and to oppose authority - this only leads to marginalization. It is nigh impossible to escape power, so it is it even worth fighting the system? Power has shaped not only the prisons, but also the rest of society by determining what is the norm - "it is [not] surprising that prisons resemble factories, schools, barracks, hospitals, which all resemble prisons." (Foucault 228) Thus, disciplinary power does not merely affect the delinquent, but it also affects the average citizen. The penal system is actually a carceral network that penetrates everywhere. ...read more.