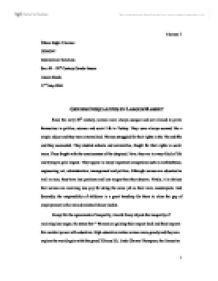 Telemez 1 �zkan Bugra Telemez 20300347 International Relations Sec. 48 - 20th Century Gender Issues Jessica Sands 17th May 2004 GENDER INEQUALITIES IN LABOUR MARKET Since the early 20th century, women were always unequal and not allowed to prove themselves in politics, science and social life in Turkey. They were always seemed like a simple object and they were externalized. Women struggled for their rights in the 70s and 80s and they succeeded. They studied schools and universities, fought for their rights in social areas. They fought with the conciousness of the despised. Now, they are in every field of life and trying to gain respect. They appear in many important occupations such as architechture, engineering, art, administration, management and politics. Although women are educated as well as men, they have less positions and less wages than they deserve. Firstly, it is obvious that women are recieving less pay for doing the same job as their male counterparts. And Secondly, the responsibilty of childcare is a great handicap for them to close the gap of employement in the male-dominated labour market. Except for the agreements of inequality, Arnold Pacey objects the inequality of recieving less wages. He states that " Women are gaining their respect back and they improve thir cerebral power with education. High-education makes women more greedy and they can explore the world again with this greed."(Pacey 25). Linda Chaves-Thompson, the Executive Telemez 2 Vice President of American Force of Labor, defends the equality in receiving wages however, she states that women should ask for their money if there will be an inequality. "We also need to demand equal pay for work of equal value from employers. ...read more.

Ingrid Palmer argues that the division between part time and full time work is the most crucial new form of labour market segmentation in Britain since the 1940's.(Palmer 128) Part time workers who are employed for less than eight hours a week are unable to qualify for certain benefits and right which is extremely inequitable. Part time workers receive an insecure pay and can be exploited by their employers very easily. Hence this type of labour is very attractive to an employer as part time workers are essentially a cheap and flexible source of labour. In Turkey, many students are working in part-time jobs for building up their pocket money and teenage women's are involved this jobs especially whose are abroad from their family. It shows us women are skilled to only work in part-time jobs to make money. Why do women opt for this kind of employment? Many believe that it is due to childcare responsibilities and it is their choice to work in part time labour. The opposing argument to this points out that women are constrained by social and economic factors, which force them to take on part time employment. For instance, state childcare is very limited presently and many mothers may be unable to afford expensive care bills. "As a result part time work is their only alternative and it would seem that domestic responsibilities are shaping the choices in the labour market."(�zyegin 95) Women are therefore receiving the jobs that are least attractive because they have to fulfil the role of a domestic mother, caring for the children while the farther brings in the main income and also, mothers are more careful to their childs rather than fathers. ...read more.

Reasons for gender inequality in the labour market vary in their nature. It has been explained why a large number of women are concentrated in part time work, which provides a lower wage compared to full time work. This can be seen it terms of either, their choice or rather the social and economic constraints that drive them to do this type of labour. The fact that many women work in the secondary sector also raises issues of inequality. Employers can take advantage of them, as the work is very casual and poorly regulated. In conclusion, It is also apparent that women are slow to be promoted and as a result are heavily under represented in top jobs. Discrimination accounts for this type of inequality, women have many barriers to overcome before they will be fully accepted in the current labour market. The Old Boys Networks states that "sexism is just a few of the problems that women are facing. Some measures have been taken by the Government have been taken although it has been the request of the European Union."(The Old Boys Networks) Take for example the Equal Pay Act, which has done little to close the pay gap in male and female wages. The introduction of Equal Pay Act made companies to set ten year targets to improve the treatment of women in the business. However this scheme was voluntary and has done little to improve the situation. It seems that employers tend to regard women as a risk, believing that they are more likely to show more loyalty towards their husbands than dedicate themselves to their work. As long as this feeling remains, women will remain unequal in a male dominated labour market. ...read more.