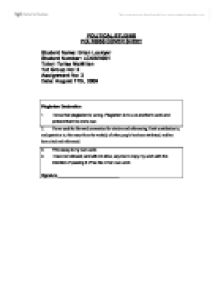 How does neoliberalism legitimize globalism

POLITICAL STUDIES POL1005S COVER SHEET Student Name: Brian Lockyer Student Number: LCKBRI001 Tutor: Talisa McMillan Tut Group No: 2 Assignment No: 3 Date: August 17th, 2009 Plagiarism Declaration 1. I know that plagiarism is wrong. Plagiarism is to use another's work and pretend that it is one's own. 2. I have used the Harvard convention for citation and referencing. Each contribution to, and quotation in, this essay from the work(s) of other people has been attributed, and has been cited and referenced. 3. This essay is my own work. 4. I have not allowed, and will not allow, anyone to copy my work with the intention of passing it off as his or her own work. Signature ______________________________ How does neo-liberalism legitimize globalism? Neo-liberalism is the defining political ideology of the modern era. It can be defined as 'the policies and processes whereby a relative handful of private interests are permitted to control as much as possible of social life in order to maximize their personal profit' (Chomsky, 1999:7). ...read more.

Military globalism is associated with the long-distance networks in which force, and the threat or promise of force, are deployed (Nye, 2000:4). A well-known example of military globalism was the "balance of terror" and strategic interdependence that existed between the United States and the USSR during the Cold War. The fourth dimension of globalism is cultural globalism which involves the global movement of ideas, information, images and people. Contemporary globalisation encompasses many neoliberalist ideas which include; heightened integration in the world economy, an emphasis on free markets and competition as well as the promotion of individualism, consumerism and efficiency. The concept of neoliberal globalisation has been said to be the most effective way of maximizing prosperity and making the world a freer and more peaceful place (Steger, 2004:7). According to neoliberalists, globalisation is beneficial as it reduces the income gap between the industrial core and the developing periphery; the emphasis on free and liberalized trade is also beneficial in bringing about a greater global flow of goods as well as the promotion of competition and the establishment of wider markets (Steger, 2004:7). ...read more.

Globalisation as a result of neoliberal policies has resulted in the development and growth of a huge gap between the affluent countries of the developed world and the poorer countries of the developing world. The concept of 'global liberal governance' encompasses neoliberal organisations such as the World Bank, IMF, WTO and many NGO's which have many objectives, one of which is the alleviation and eradication of poverty through the 'unqualified and comprehensive modernization and transformation of traditional societies' into more Western and neoliberalist societies (Charbonneau, 2008:86). This is another example of how neoliberalism legitimizes globalism as it is the neoliberalist principles that provide the mechanism through which globalism functions. Another example can be seen by analyzing the effects of neoliberalist principles on environmental globalism, the continual growth and spreading of multinational cooperation's around the globe based on the ideas of liberal and free trade and the disintegration of borders and boundaries has had huge repercussions for environmental sustainability. The spread of diseases such as HIV AIDS and the other viruses such as SARS has been attributed to the interconnectedness of the planet and the speed at which people can travel around the world as a result of neoliberal globalisation. ...read more.