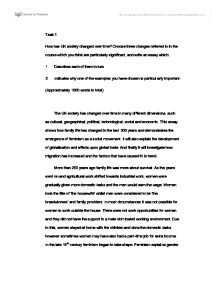 How has UK society changed over time?

Task 1 How has UK society changed over time? Choose three changes referred to in the course which you think are particularly significant, and write an essay which: 1 Describes each of them in turn 2 Indicates why one of the examples you have chosen is particularly important. (Approximately 1000 words in total) The UK society has changed over time in many different dimensions, such as cultural, geographical, political, technological, social and economic. This essay shows how family life has changed in the last 200 years and demonstrates the emergence of feminism as a social movement. It will also explain the development of globalisation and effects upon global trade. And finally it will investigate how migration has increased and the factors that have caused this trend. More than 200 years ago family life was more about survival. As the years went on and agricultural work shifted towards industrial work, women were gradually given more domestic tasks and the men would earn the wage. Women took the title of 'the housewife' whilst men were considered to be 'the breadwinners' and family providers. In most circumstances it was not possible for women to work outside the house. There were not work opportunities for women and they did not have the support in a male dominated working environment. ...read more.

Some commentators argue that as the trade increases the dominant countries involved in the market experience greater wealth, however it is often at the expense of less influential countries whose are not as dominant as the market. As the dominant countries get richer their governments also became more powerful. This means they have a greater influence on world events. This is not the same as the developing countries whose see less benefits. As globalisation has increased there has also being an increase in migration. Migration is a movement of people, who leave their countries to find a better place to live and work. From the view of a social scientist, migration is often explained as a complex combination of economic and political forces that both 'push' and 'pull' the process. (Sheratt et al., 2004, p.69) People have been always migratory. In the past they were moving from place to place because of two main reasons; they needed more food, which was not available at the certain place of just because they were under pressure from more powerful groups. As Britain's wealth had growth there were increase in slavery. As an example could be sixteenth and seventeenth centuries. Britain was manufacturing goods such as clothing and guns, which were taken to the Africa to be sold. ...read more.

3 Future: give at least one example of a way in which you could improve a specific learning skill in future. During this course I greatly improved my reading and writing skills in an academic way. At the start of the course I found it quite difficult to read the course book but as time passed I started to enjoy it and I now find it much easier. When writing and constructing essays I found it tough at first however as time went on I began to gain more confidence in this area. My greatest strength when learning is my time management. Due to my work and academic studies I have to be strict with my time, I have to allow two hours each day. One example of a weakness of mine is I find it difficult to make essays plans. I want to start writing straight away and I think this has a negative impact on the structure of my essays. I want to improve in all areas of my learning. I feel I still have great room for improvement. However I would like to really concentrate on my writing skills and create well structured, comprehensive essays. One way of improving my writing skills would be to improve my essay planning ability. I believe it will greatly benefit my essays. Word count: 200 ...read more.