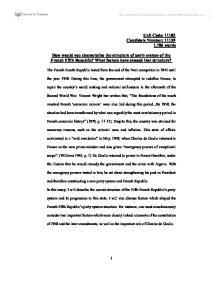 How would you characterise the structure of party system of the French Fifth Republic? What factors have shaped that structure?

Unit Code: 11103 Candidate Number: 11139 1,786 words How would you characterise the structure of party system of the French Fifth Republic? What factors have shaped that structure? The French Fourth Republic lasted from the end of the Nazi occupation in 1945 until the year 1958. During this time, the government attempted to redefine France, to repair the country's world ranking and national self-esteem in the aftermath of the Second World War. Vincent Wright has written that, "The foundations of the much vaunted French 'economic miracle' were also laid during this period...By 1958, the situation had been transformed by what was arguably the most revolutionary period in French economic history" (1978, p. 11-12). Despite this, the country was strained for numerous reasons, such as the colonial wars and inflation. This state of affairs culminated in a "cold revolution" in May, 1958, when Charles de Gaulle returned to France as the new prime-minister and was given "emergency powers of exceptional scope". (Williams 1963, p. 1) De Gaulle returned to power in France therefore, under the illusion that he would remedy the government and the crisis with Algeria. With the emergency powers vested in him, he set about strengthening his post as President and therefore constructing a new party system and French Republic. In this essay, I will describe the current structure of the Fifth French Republic's party system and its progression to this state. ...read more.

De Gaulle also stipulated as a condition of his return to government that the Constitution must be changed. This was drafted by a group of parliamentary members, de Gaulle's newly appointed Minister of Justice, Michel Debr�, and de Gaulle himself. The text was adopted by the government on the 3rd of September 1958 and popularly accepted by the nation just over three weeks later (Wright 1978, p. 22). The main element of this new Constitution which helped structure the party system was that the nation would now vote directly for a President. Furthermore, though the original text specified that an electoral college of 80,000 political nobles were to vote, the 1962 referendum changed this to universal suffrage. (Wright 1978, p.24) De Gaulle claimed in a press conference in 1964, that the change made "...implies that the Head of State, elected by the nation, must be the source and holder of power" (Wright 1978, p. 25). This amendment shaped the structure of Fifth French Republic party system because universal suffrage brought with it the two ballot system. This in turn, with the death of de Gaulle, caused the disappearance of the centrists, who had maintained a position between the left and the Gaullists since the beginning of the Fifth Republic. "With de Gaulle's death however, and the progressive acceptance of the new political institutions...the raison d'�tre of these forces was undermined" (Bartolini 1984, p. ...read more.

131): the left wing, 'Parti Socialiste', and the right Wing, 'Union pour un Mouvement Populaire'. However, there are also other parties which are pertinent to the French party system today. For example, "candidates from splinter parties...received more than half the first-ballot votes in the 2002 presidential elections" (Kesselman 2007, p. 131). These include Fran�ois Bayrou who fronts the UDF and Olivier Besancenot from the Ligue Communiste R�volutionaire, who leads the opposition against Nicolas Sarkozy. However, these parties are not serious contenders in terms of the Presidency, as support for 'fringe parties' is divided as opposed to being concentrated between just two parties. In conclusion, I would characterise the Fifth French Republic's party system as one which has essentially two ideological poles which have gradually come closer together due to the electoral system put in place as part of the Gaullist Constitution. Though there are multiple parties that exist within this system, realistically, the moderate PS and UMP are the main presidential contenders, as shown in the second round of the 2007 Presidential elections. I believe it was the creation of the two ballot system and the final raising of the threshold to 12.5% which forced out minority parties as well as encouraging moderate parties. This was all intended by de Gaulle, who aimed to create a more stable government and party system since witnessing the volatile nature of the Fourth Republic. In short, De Gaulle and the electoral system are inextricably linked therefore as the main factors which helped to shape the Fifth French Republic's party system. ...read more.