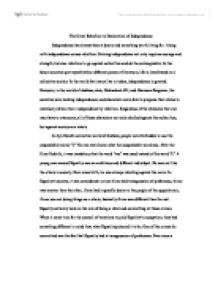 In summary, Anthem, Antz, Fahrenheit 451 and Harrison Bergeron all go to show

The Great Rebellion to Declaration of Independence Independence has always been a desire and something worth living for. Along with independence comes rebellion. Gaining independence not only requires courage and strength, but also rebellion to go against authorities and do the unimaginable. In the future societies portrayed by four different pieces of literature, life is lived based on a collective society. In the world that many live in today, independence is granted. However, in the world of Anthem, Antz, Fahrenheit 451, and Harrison Bergeron, the societies were lacking independence, and characters were able to progress their status to eventually obtain their independence by rebellion. Regardless of the obstacles that one may have to overcome, all of these characters not only rebelled against the authorities, but against society as a whole. In Ayn Rand's collective world of Anthem, people were forbidden to use the unspeakable word, "I." No one even knew what the unspeakable word was. After the Great Rebirth, it was mandatory that the word "we" was used instead of the word "I." A young man named Equality was an ambitious and different individual. He was not like the others in society. Ever since birth, he was always rebelling against the norm. In Equality's society, it was considered a crime if one had transgression of preference, if one was smarter than the other, if one had a specific desire to the people of the opposite sex, if one was not doing things as a whole, basically if one was different than the rest. ...read more.

In Ray Bradbury's futuristic Fahrenheit 451, Guy Montag is a fireman who burns books In Montag's world, firemen start fires rather than putting them out. The people in this society do not read books, enjoy nature, spend time by themselves, think independently, or have meaningful conversations. Instead, they drive fast, watch excessive amounts of television on wall-size sets, and listen to the radio on "Seashell Radio" sets attached to their ears. In Montag's society, it was considered a crime if one read or possessed books in their house. Once, when he responded to an alarm that an old woman has a stash of hidden literature, the woman shocked him by choosing to be burned alive along with her books. Montag's dissatisfaction with his life increased, and he began his first act of rebellion by searching for a solution in a stash of books that he had stolen from his own fires and hidden inside an air-conditioning vent. When Montag failed to show up for work, his fire chief, Beatty, paid a visit to his house. Beatty explained that it was normal for a fireman to go through a phase of wondering what books have to offer. On hearing this, Montag opened a book and began to read, hoping to find something meaningful. He remembered that he once met a retired English professor named Faber sitting in a park, and he decided that this man might be able to help him understand what he reads. ...read more.

Yet, Harrison was still not satisfied. Right then and there, in front of the whole country, Harrison shot himself. Not only did he himself gain independence, but he left those three million people something to think about. Before Harrison left, he helped three million people start their life's journey trying to gain their own independence, just like he had gained his. In summary, Anthem, Antz, Fahrenheit 451 and Harrison Bergeron all go to show that not even the collective world in which the characters lived in can come in the way of gaining their independence. It doesn't take a majority to form a rebellion, it takes only a few determined leaders. That is what these characters were, leaders. The performance of the rebellion was not meant to pin point any specific oppressive system, but instead, it was merely an act to acquire independence. A few days before each act of rebellion, the characters dared to struggle for their independence, and once the rebellion took place, they dared to win their independence. They all thought that in a time of national deceit, telling the truth became a revolutionary act. What has commonly been called rebellion has more often been nothing but a glorious struggle in opposition to the ruling oppression of society. All of the characters were able to quickly realize the negative influences of the collective societies, and then dramatically change their own lives by rebelling and subsequently conquering independence. ...read more.