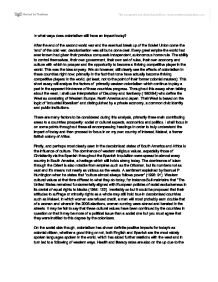 In what ways does Colonialism still have an impact today?

In what ways does colonialism still have an impact today? After the end of the second world war and the eventual break up of the Soviet Union come the 'end' of the cold war, decolonisation was all but a done deal. Every great empire the world had ever known had given their previous conquests independent, autonomous home rule. The ability to control themselves, their own government, their own set of rules, their own economy and culture with which to prosper and the opportunity to become a thriving competitive player in the world. This was the idea anyway. We do however, still clearly see the effects of colonialism in these countries right now; primarily in the fact that none have actually become thriving competitive players in the world, (at least, not to the point of their former colonial masters). This short essay will analyse the factors of primarily western colonialism which continue to play a part in the apparent hindrance of these countries progress. Throughout this essay when talking about the west, I shall use interpretation of Deudney and Ikenberry (1993/94) who define the West as consisting of Western Europe, North America and Japan. Their West is based on the logic of 'industrial liberalism' and distinguished by a private economy, a common civic identity and public institutions. There are many factors to be considered during this analysis, primarily three main contributing areas to a countries prosperity: social or cultural aspects, economics and politics. I shall focus in on some points throughout these all encompassing headings in order to truly understand the impact of today and then proceed to focus in on my own country of interest, Malawi, a former British colony of Africa. ...read more.

The erosion of Western culture follows, as indigenous, historically rooted mores, languages, beliefs and institutions reassert themselves." (1993: 192) This point too, can be backed up by the points made by Handelman that many states, especially African states have attempted to employ democracy, in a manner which would replicate the west and satisfy Deudney and Ikenberry but have in turn failed, only to go back to an authoritarian or single party state, "Of 98 democratic transitions in the Third World, fewer than half (46%) survived until 2004... [with only] 37%... in sub-Saharan Africa" (2009: 31) Handelman continues to argue that perhaps the impact of colonialism, or in fact more precisely decolonisation with the installment of western views is a large part of what has hampered success of countless Third World countries. Logically, every prosperous First World country has been through extended periods of authoritarian or single party rule to get where they are today, why should the Third World be any different? When they want democracy, they'll have a revolution like the rest of us did... and in fact, like exactly what they're doing in Libya right now. The spread of democracy though, cannot simply be pushed aside by these few points made by Handelman, Huntington and O'Hagan. Handelman does not deny that the spread of democracy or the push for democracy in a neo-colonial manner has not been a massive impact of colonialism. He further links the cultural impacts of education and primarily literacy rates to the incline of democracy rates within Africa, therefore showing how a cultural impact, impacts upon political. ...read more.

suggestion that "both the West's capacity and will to dominate is gradually receding as other civilizations experience economic growth and a revival of cultural assertiveness." (1996: 82-91, 102-9), (2002: 119) In conclusion I believe that dependance and western values may be the most influential impacts of colonialism this very day, but that the world is rapidly changing and the west must wake up to this fact and get on board with China, a country which still has memories of times when it too was going through this, and so is better placed than most to tackle it. It is also fair to say that had Africa not been colonised it would today still have problems of economic development. Africa was way behind technologically and would have needed to import western technology and therefore would have had to export something to pay for it. So Africa's position in the international economy, particularly as a producer of primary products for industrialized countries, should not be blamed solely on colonialism. It is largely a function of unequal development. We may have pushed Deudney and Ikenberry western ideals of democracy and free trade upon third world countries, and yes trade is, and always will be unequal in some sense. "Richer countries subsidise their own producers and supply chains make small-scale producers compete to sell low price produce to richer countries, who capitalise on the value added." (Vorley, 2003).But there will come a point that the small scale producers will have the gumption and more importantly, power to negotiate on their terms... the terms of a newly formed first world country. ...read more.