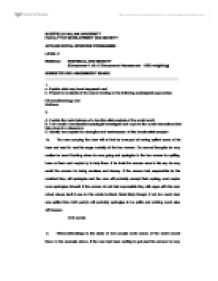 In the example above, if the man had been waiting to get past the women he may be secretly cursing the women for being so selfish for standing in his way so much. Also, if the women had seen him, the women may feel that they are not being obstinate at all and rather that the man is being rude, impatient and inconsiderate to expect them to move just so that he can get past. Goffman 'explores the details of individual identity, group relations, the impact of environment, and the movement and interactive meaning of information.' (Barnhart, 1994). In the example above the man probably identifies himself as just another person in the pub equal to all others. As he is walking through the pub we can assume that he probably doesn't know a lot of the people around him, or at least he is not interacting with them as he walks past them. ...read more.

Functionalists believe that we react to others because of some overriding social dictation or for physical or psychological need. 2b. To study the social interactions in a classroom a functionalist would study the pupils by setting them group or paired tasks. The functionalist would study how the pupils acted and worked with each other and then would try to deduce why the pupils did and said what they did and why. 2c. A strength of functionalist analysis is that it is objective and positivist and therefore if a functionalist theory proves reliable then its application can be very practical. Also they are generally broader as functionalist tend to look at the broader picture rather than being subjective. A weakness of the functionalist perspective is that it can over-simplify society until humans are treated like mathematical functions or plants or machines. ...read more.