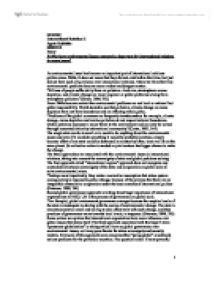 GI1010C International Relation II Agata Kobialka 04031915 Essay: 9) Why have environmental issues emerged as important for international relations in recent years? An environmental issue has become an important part of international relations politics since 1960s. It does not mean that they did not exist before that time, but just did not have such a big volume over international relations. Moreover from that time environmental problems become more evident and dangers matter. "Billions of people suffer daily from air pollution. Acid rain, stratospheric ozone depletion, and climate change are major regional or global problems arising from atmosphere pollution."(Green, 2004, 452) From 1960s become certain than enviromental problems are not local or national but global responsibility. World started to see that pollution, climate change or ozone depletion have not have boundaries and are affecting whole globe. "Problems of the global commons are frequently transboundary: for example, climate change, ozone depletion and marine pollution do not respect national boundaries. Global problems represent a major threat to the environment and can only be solved through concerted action by international community."(Carter, 2001, 164) The single state can be to small or to weak to do anything about the environmental issues and even if it could do something it would be probably pointless, simply because effort of one state could be destroyed in minutes by other, since we life on the same planet. ...read more.

Not all pacts and agreements were so fortunate; the Kyoto Protocol is still open issue after 8 years from first time it was on the agenda in 1997. The Kyoto Protocol is an amendment to United Nations Framework on Climate Change (UNFCCC) and international treaty on global warming. Officially 141 countries ratified the Protocol in 1997 in Japan. Position of some countries as Australia, Japan, Russia and especially United States of America has been highly controversial. Australia the second largest emitter per capita of greenhouse gases refused to sign the agreement as regarding to Australia's current president would damage Australian economy. As the Kyoto Protocol is very delicate issue on international and national level the opposition party - Labour Party strongly supports the regime and situation may change after general election. A United States position is one of the most complex one as well as illustrates the importance of foreign policy in environmental matters. Originally America was pretty "enthusiastic" about the polices in the protocol and supported strongly binding the greenhouse gases emission. Former president of the country Bill Clinton signed the agreement back in 1998, but the approach to the policies completely changes with the new president cadent ion. ...read more.

After US and Australia the biggest potential buyers of the "hot- air" withdrawn from the agreement on Global Warming position of Russia was watched closely. In November 2004 president Putin notified the UN of its ratification of Kyoto Protocol. Overall the Kyoto is a very good idea and tackles the problem of climate change in same scale, unfortunately has not worked as smoothly as Montreal Protocol "Certainly international efforts to migrate climate change have been less successful than action on ozone depletion". (Carter, 2001, 237) In deed environmental matters are an important issues for international relations politics. On this two examples can be illustrated how complex those issues are and how much their success or failure depends on political and economical situation. It would be naive to think that global cooperation would be easy to achieve. Despite the difference in relations among the countries, their historical background, long conflicts or alliances, something can be done on the huge scale to prevent human disasters and that is the important fact. Since the problem of environment become larger that national or local boundaries the way to tackle it had to change as well. Collective action is indispensable as affect more or less whole world population. In the age of instant consumption, hopefully globe will manage the environmental issues as effective or even more effective than today. ...read more.