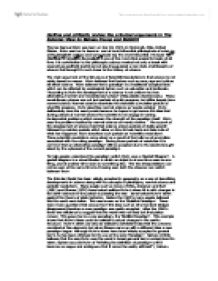 Outline and critically review the principal arguments in The Kuhnian View by Haines-Young and Petch!!! Thomas Samuel Kuhn was born on July 18, 1922, in Cincinnati, Ohio, United States

Outline and critically review the principal arguments in The Kuhnian View by Haines-Young and Petch!!! Thomas Samuel Kuhn was born on July 18, 1922, in Cincinnati, Ohio, United States. Kuhn went on to become one of most influential philosophers of science of the twentieth century and some would say the most influential. His book The Structure of Scientific Revolutions is one of the most cited academic books of all time. His contribution to the philosophy science marked not only a break with several key positivist doctrines but also inaugurated a new style of philosophy of science that brought it much closer to the history of science. The main argument of The Structure of Scientific Revolutions is that science is not solely based on reason. Kuhn believes that factors such as race, age and culture all effect science. Kuhn believes that a paradigm is a traditional accepted idea which can be affected by sociological factors such as education and textbooks. "According to Kuhn the development of a science is not uniform but has alternating 'normal' and 'revolutionary' phase" (http://plato.stanford.edu). ...read more.

Jones tested Kuhn's views against the theory of plate tectonics. Before the 1960's many people believed that the earth was stable. This was known as the 'Stabilist Paradigm'. There were many questions that arouse from this idea such as why had land bridges disappeared therefore a new paradigm was easily accepted. After the 1960's there was effidence to suggest that the world was not fixed but that plates moved. This gave rise to a new paradigm, the 'Mobilist Paradigm'. This example shows that Kuhn's ideas could be related to actual changes in the earths structure. Kuhn's views can also be related to Aristotle's idea that the universe consisted of five elements but when Biswas came up with a different idea a new paradigm began. Although Kuhn's views have been widely accepted in general terms he has been criticised for his use of the word 'Paradigm'. Sphere (1964) believes that the way Kuhn uses the word in broad general terms undermines his views. Sphere accuses Kuhn of "inflating the definition of paradigm until it becomes so vague and ambiguous that it cannot be easily withheld" ( Haines-Young et al). ...read more.

According to Hacking (1983) there are three main ways in which theories can be incommensurable. Firstly there is topic incommensurability. This is when two entirely different topics are being discussed. For a comparison to be made the two theories must be on the same topic. The second type is incommensurability by dissociation. This happens when a theory from the past can no longer be understood by today's generation. For people today to understand Aristotle's ideas they would have to dissociate themselves from today's way of thinking. The final type is meaning incommensurability. This is connected with the meaning of words in which any comparison between theories is attempted. This comes to the front because many believe that the meaning of scientific terms can only be understood in the context of a theory. So therefore if theories are incommensurable then there can be no rational basis for choosing between them. The choice may be down to other determining factors such as political forces. Kuhn concludes: "As in political revolutions ....... There is no higher standard than the assent of the relevant community" (Kuhn, 1970a, pg 94) Aine Clinton 12660043 110GGY228 Outline and Critically Review the Principal Arguments in "The Kuhnian View" by Haines-Young and Petch. ...read more.