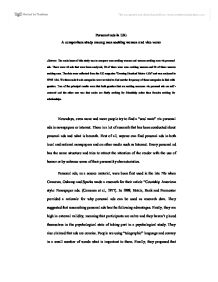 Personal ads in UK: A comparison study among men seeking women and vice versa Abstract. The main issue of this study was to compare men seeking women and women seeking men via personal ads. There were 40 ads that were been analyzed, 20 of them were men seeking women and 20 of them women seeking men. The data were collected from the UK magazine "Evening Standard Metro-Life" and was analyzed in SPSS 16.0. We then made 8 sub-categories were we tried to find out the frequency of those categories in link with genders. Two of the principal results were that both genders that are seeking someone via personal ads are self-centered and the other one was that males are firstly seeking for friendship rather than females seeking for relationships. Nowadays, even more and more people try to find a "soul mate" via personal ads in newspapers or internet. There is a lot of research that has been conducted about personal ads and what is beneath. First of all, anyone can find personal ads in both local and national newspapers and on other media such as Internet. Every personal ad has the same structure and tries to attract the attention of the reader with the use of humor or by enhance some of their personality characteristics. ...read more.

of them were men seeking women and the least twenty (20) was women seeking men. We also developed a coding frame of the following sub-categories in order to analyze data. Those sub-categories were 'Use of humor', 'Mention of own interests', 'Mentions their own emotional/ personality characteristics', 'Requests particular emotional/ personality characteristics of others', 'Types of relationship being sought', 'Mentions job/ status', 'Requests a particular job/ status' and 'Mentions own race/ ethnicity'. Data were analyzed in SPSS 16.0. Results In general, results of our frequency analysis vary among men seeking women and women seeking men. In many categories we expected different results. All of the following eight (8) categories had a numeric type of analysis with values '0' meaning 'No' and '1' meaning 'Yes', apart from the 'Types of relationship being sought' category where the values were 'Fr' for 'Friendship', 'Fu' for 'Fun', 'Re' for 'Relationship', 'Ro' for 'Romance' and 'S' for 'Sex'. Use of humor: As we can see in this frequency analysis ('Use of humor' descriptive statistic), only 15% of women used humor in their ads instead of 45% of men. This shows us that men are emphasizing in the sense of humor more that women do. ...read more.

That means that neither females nor males are paying attention to a particular job or status. That is why they did not find it important to refer to their job or status as well. Mentions own race/ ethnicity: In this group males scored in the average whereas females had a 65% of referring their race or ethnicity. Discussion We found out from that research that males are using humor as well as their interests to attract a female. Another think that it is worth mentioned is that both genders scored highly in mentioning things about their emotional or personality status, meaning that they are probably self-centered and trying to look confident, on the other hand females are willing to find someone with the same emotional or personality status. Another interesting aspect of this research was that females are mostly seeking someone to get in a relationship with them at once, whereas males are mostly paying attention to a good friendship that can be developed to a romantic relationship. Finally, two other things that we found out was that both males and females don't really care about job status and that females are more open-minded and 'capable' on mentioning their race or ethnicity. To conclude with, it seems obvious that there is a need in conducting more researches about decoding personal ads and what may be beneath them. ...read more.