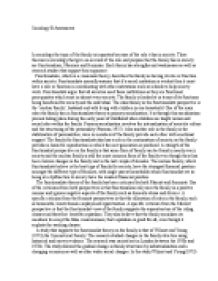 Theories on the Family

﻿Sociology B Assessment In sociology the topic of the family is important because of the role it has in society. Three theories in sociology that give an account of the role and purpose that the family has in society are functionalism, Marxism and feminism. Each theory has strengths and weaknesses as well as research studies that support their argument. Functionalism, which is a consensus theory, describes the family as having its role or function within society. Functionalists normally assume that if a social institution is evident then it must have a role or function in coordinating with other institutions such as schools to help society work. Functionalists argue that all societies need these institutions as they are functional prerequisites which exist in almost every society. The family is looked at in terms of its functions being beneficial for society and the individual. The ideal family in the functionalists perspective is the ?nuclear family?, husband and wife living with children in one household. One of the main roles the family has in functionalists theory is primary socialization. It is through this socialization process taking place during the early years of childhood when children are taught norms and social roles within the family. ...read more.

Marxists therefore argue that the nuclear family ensures that generation after generation remains obedient to the capitalism system. The nuclear family is an ideological conditioning device which reproduces the ideologies which maintain capitalism, children are in effect trained to attain the values and behaviours of their parents and so often follow them into the same type of work. The family?s job is not to bring up children, but to reproduce the labour power that maintains capitalism. Women and children, according to the Marxist view , are in effect a reserve army of labour. The fact that capitalists can draw upon their labour power, and that workers need to look after their families, means that there is an ever plentiful supply of cheap labour that helps keep wages low(Miliband, 1969). Also in Marxism the family acts as a kind of safety valve or cushion against the capitalist system. So the workers with built up frustration against the capitalist system and the ruling class return to the family to be comforted, ensuring that the stress is released and the worker does not revolt against the system. This idea can also be linked to domestic abuse. ...read more.

Women then became excluded from paid work and were reliant on the male wage which gave way to the segregated roles. A strength of the study is that make clears the development of separate conjugal roles which has led to the subjugation and exploitation of woman. A criticism of the study is that it focuses on solely the negative side of the family and ignores the positive aspects that the family can have. Also the study could be said to have a low ecological validity because sample group was small and not representative of the whole of society. The contribution that feminism has gave to the topic of the family have been profound in promoting gender equality in the family. In conclusion the perspectives of functionalism, Marxism and feminism have contributed much to the topic of the family. The functionalist view highlights the positive aspects of the family but is limited because there can be a lack of consensus in the family meaning that society does not function. The Marxist view highlights the relationship between the family and the economic system but does not address other factors that influence the family. The feminist view highlights why there is gender inequality but because there is various views amongst the feminist perspective can contradict one another. ...read more.