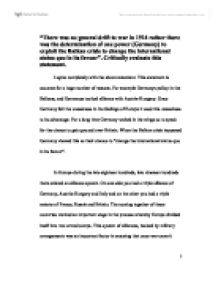 &quot;There was no general drift to war in 1914 rather there was the determination of one power (Germany) to exploit the Balkan crisis to change the international status quo in its favour&quot;. Critically evaluate this statement.

"There was no general drift to war in 1914 rather there was the determination of one power (Germany) to exploit the Balkan crisis to change the international status quo in its favour". Critically evaluate this statement. I agree completely with the above statement. This statement is accurate for a huge number of reasons. For example Germanys policy in the Balkans, and Germanys tactical alliance with Austria-Hungary. Once Germany felt the uneasiness in the feelings of Europe it used this uneasiness to its advantage. For a long time Germany waited in the wings so to speak for the chance to gain ground over Britain. When the Balkan crisis happened Germany viewed this as their chance to "change the international status quo in its favour". In Europe during the late eighteen hundreds, late nineteen hundreds there existed an alliance system. On one side you had a triple alliance of Germany, Austria-Hungary and Italy and on the other you had a triple entente of France, Russia and Britain. ...read more.

This is just one example of where Germany exploited the Balkan crisis in its own favour. The Young Turks policy of Ottomanization caused the Balkan states to come together and form what was known as the Balkan league. This league was formed in nineteen twelve and composed of Serbia, Bulgaria, Greece and Montenegro. The policy of Ottomanization meant the voluntary assumption by all the subjects of the empire, Moslems and Christians alike, of the full duties of citizenship coupled with a loyal support of the government. The Balkan war of nineteen twelve had the members of the Balkan league on one side and Turkey on another. It caused great and universal surprise because the world was not prepared for the quick and resounding victory won by the allies. Turkey fared badly at the Treaty of London because its size was reduced dramatically. All Ottoman territory was surrendered to the victorious allies. Bulgaria however was unhappy with the outcome of the Treaty of London and so as a result on June twenty ninth nineteen thirteen war was declared among the allies. ...read more.

Germany had always felt left out in colonial expansion. Germany felt that Britain and France were denying them their rightful share of colonial influence. They thought the Balkan crisis was their chance to increase their colonial influence without the help of Britain or France. Therefore Germany exploited the Balkan crisis in an effort to change the international status quo in its favour. Germany totally exploited the Balkan crisis to their advantage. They were determined to change the international status quo in its favour. They knew that by backing Austria during the crisis, they in turn would support Germany should a war start. Germany knew that backing Austria during the crisis would eventually lead to a European conflict and when Austria handed its ultimatum to Serbia, this conflict started. In a way Germany got what it wanted even though they weren't seen as being the ones who started the war. Germany knew that by backing Austria, it would mean that the already fragile lines of communication between Austria and Serbia would be irreconcilably damaged. This ensured that the international status quo was changed in Germanys favour. ...read more.