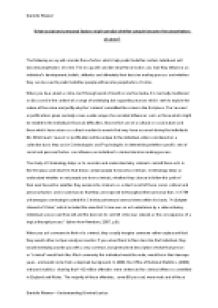 What social and personal factors might predict whether people become the perpetrators of crime?

﻿Danielle Weaver What social and personal factors might predict whether people become the perpetrators of crime? The following essay will consider those factors which help predict whether certain individuals will become perpetrators of crime. The essay will consider what these factors are, how they influence an individual?s development, beliefs, attitudes and ultimately their decision making process and whether they can be used to predict whether people will become perpetrators of crime. When you hear about a crime, be it through word of mouth or via the media, it is normally mentioned or discussed in the context of a range of underlying but supporting reasons which seek to explain the nature of the crime and justify why the ?criminal? committed the crime in the first place. The ?reasons? or justifications given normally cover a wide range of associated influences such as those which might be related to the individuals financial difficulties, those which are of a cultural or social nature and those which have arisen as a direct reaction to events that may have occurred during the individuals life. Whilst each ?reason? or justification will be unique to the individual, when considered on a collective basis they assist Criminologists and Psychologists in determining whether specific sets of social and personal factors can influence an individual?s criminal decision making process. ...read more.

This treatment, both at home and when he was at school, would have caused him to find it hard to distinguish between what was right and what was wrong which would have been frustrating, particularly to someone so young. As a result of this he may have found it hard to show his true emotions in fear of repercussions either from his mother, particularly if she was having a bad day or from a fear of ridicule by his school peers. Arthur John Shawcross went on to kill 11 people. By considering his life experiences, in particular the level of bulling he suffered whilst at school and the emotional torment imposed on him by his Mother, you can see that this was no doubt a contributing factor which helped frame his state of mind and possibly triggered his thirst for vengeance through killing. At the start of his prison sentence Shawcross was subjected to a psychological evaluation. He was assessed as ?an immature adolescent with a schizoid personality who decompensated in ego functioning under the influence of unemployed stress, employment stress and rejection by his wife? Christopher, BD (2003). This evaluation shows that he found it hard to deal with stressful situations whether they were work related problems, or personal problems which no doubt began when he was a young child. ...read more.

Situations will arise where factors of a personal nature, such as family, financial, health type issues, will be key factors in making such a prediction. There will be other occasions when factors may be of a social nature, such as the environment the individual grows up in or the company they keep. There will be times when social and personal factors may play a minor role, for example financial difficulties may drive an individual to commit a crime. Having considered the evidence above it seems reasonable, therefore, to conclude that different factors, each of which will influence individuals differently, occur throughout people?s lives effecting whether or not they will become criminals. ________________ Reference List Associated press. (2008). Serial killer Arthur Shawcross dead at 63. Retrieved December 30th 2010. From internet address http://www.msnbc.msn.com/id/27665929/ns/us_news-crime_and_courts/ Bruinsma, G; Elffers, H; Keijser, J. (2004). Punishment, Places and Perpetrators. Christopher, BD (2003). Talking with Serial Killers (1st edition). London: John Blake Publishing. Developments in Criminology and Criminal Justice Research, Volume 1(issue 1), Page 260. Newburn, T (2007). Criminology (1st edition). Devon: William Publishing. Office of National Statistics. (2006). Majority of offenders, 80 per cent, are male. Retrieved October 25th, from http://www.statistics.gov.uk/cci/nugget.asp?id=1661 Pearson, G. (1994). Youth, Crime, and Society. M. Maguire, R. Morgan, R. Reiner, (Ed.), The Oxford Handbook of Criminology (pp. 1171-1171). United States: Oxford University Press. Spergel, A. (1995). Youth Gang Problem : A Community Approach[Electronic Version]USA: Oxford University Press Danielle Weaver ? Understanding Criminal Justice ...read more.