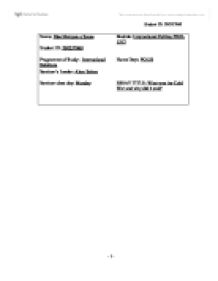 What was the Cold War and why did it end?

Name: Elsa Marques e Sousa Module: International Politics PIED-1512 Student ID: 200357860 Programme of Study: International Relations Home Dept: POLIS Seminar's Leader: Alam Salem Seminar class day: Monday ESSAY TITLE: What was the Cold War and why did it end? The Second World War was a global military conflict, the joining of what had initially been two separate conflicts. The first began in Asia in 1937 as the Second Sino-Japanese War (Japanese invasion of China); the other began in Europe in 1939 with the German invasion of Poland. This global conflict divided the majority of the world's nations into two opposing military alliances: the Allies and the Axis Powers. Spreading much of the globe, World War II resulted in the death of over 60 million people. It was by far the most "deadly and destructive war in human history"1. Hence, World War II is no doubt the starting point of recent world history and its enormous consequences gave shape to the post war world: the end of the "European Age", the rise of the United States and the Soviet Union to superpowers status, the beginning of the nuclear age, the rise of nationalism and independence in Asia and Africa and a renewed effort to secure peace through international organisation, the United Nations.2 In other words, the changes in the global distribution of power, weapons technology, the balance of political forces within and among nations, the world economy, and relations between the industrialized nations and the underdeveloped periphery led to the so important "Cold War".3 What exactly was the Cold War about? Within a framework of political relations, economic linkages, and military alliances, "the cold war was characterised by a high degree of tension between the United States and the Soviet Union, a costly and dangerous arms race; the polarisation of domestic spheres and competition and conflict in the third world".4 The Cold War shaped the foreign policy of these so called superpowers at the time and deeply affected political, economic and military institutions. ...read more.

To respond to this, USSR created the Warsaw Pact giving them the right to base its troops in the satellite countries.15 Another important factor that contributed to the Cold War was the introduction of nuclear weapons as the possession of a weapon was the main cause for its fear and distrust. The US possession of the atomic bomb following the use during the WWII in Hiroshima and Nagazaki (Japan) has affected attitudes on both sides that contributed to Cold War mistrust. "US possession of the bomb caused its leaders to be more demanding and less flexible in dealing with the Soviet Union, and the US possession and use of the bomb surely caused the Soviet leaders, in turn, to increase their suspicions of the West and the US."16 The atom bomb has no doubt played a significant role, as America was now both economically and militarily stronger than the Soviet Union. After the end of WWII, Russia was economically unstable as the war left considerable effects and exhausted Russia's military. However, the Soviet Union's desire to compete with America, led to an Arms Race in which both countries competed leading to unimproved conditions between the two countries. Four years later after the US's possession of the Atomic Bomb, the USSR had developed theirs. While the origins of the cold war were in Europe, events and conflicts in Asia and elsewhere were also important. A quite separate development in Asia, a civil war between the nationalist and communist Chinese, resulted in a communist victory in 1949 that led to a Sino-Soviet alliance (Sino means "Chinese")17. This brought to power a government which effectively unified China and restored it to a position of complete independence after a century of European colonial domination. Because the United States had, by 1949, defined all Communist governments as the enemy, the relations between China and the US quickly weakened. The United States intervened in the Chinese civil war by interposing a US fleet in the Taiwan straits, thus protecting the Nationalist Chinese, who had fled to the island, from invasion by the mainland Chinese. ...read more.

As stated by Dunbabin, "such attitudes underline the extent to which the ending of the Cold War was dependent on the internal transformation of the Soviet Union".27 Lastly but not least, the fall of the Berlin Wall in November 1989 was a significant symbol of the end of the Cold War. All in all, the effects of the Cold War have no doubt shaped international relations in so many possible ways. The Cold War involved more than just the two superpowers, the US and the Soviet Union. The superpowers were engaged in proxy wars, where they aid and train another side in the fight to indirectly keep the other occupied. These were the ways in which the Cold War would lead to "hot wars" such as the Korean War, The Vietnam War and the Soviet-Afghan War. Therefore, in my opinion the term "cold" could only be applied to the US and the Soviet Union as they were using their involvement in other countries that struggled after WWII to spread their own thinking and to attack their only rival, whilst blood shed in those other nations. These differing ideologies between the West and the East that was also known as the "Iron Curtain" had once led to a possible Third World War in which never in history there was any confrontation between countries as close to a nuclear war as the United States and the Soviet Union was. Ultimately, having lasted for decades it had finally came to an end under the George H. W. Bush and Gorbachev's administration with a "New World Order" which includes the German reunification, the disarmament treaties and cooperation at the UN on conflicts as well as the formation of the SOC in 2001 and the emergence of new potential alliances such as China and India. However, this raises the questions: do the changes since the end of the Cold War really means a new world order or more an adjustment among existing powers? Has the Cold War really ended? I believe there are still degrees of mistrust which have never gone away. ...read more.