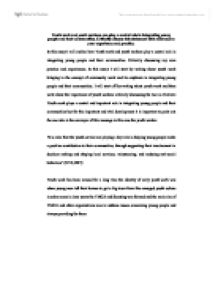 Youth work and youth workers can play a central role in integrating young people and their communities. Critically discuss this statement with reference to your experience and practice.

'the achieving of external change, of encouraging social action in the community in the pursuit of social change goals' (Preston, 1987) Also young people can form groups to want a change in the area they live for an example young people form a group in a youth club and put their views forward in wanting sports facilities in their area or other improvements in their area. 'Social action groups aim to challenge the received assumption concerning the powerful and powerless, i.e. hope to achieve improvements in their environment and living conditions' Again showing youth work engagement methods can integrate communities by making young people aware of what's happening around them and how they can contribute to society. When talking about youth and community work practices and how it integrates young people in their community in my personal learning experiences. I have discovered different aspects and theories to youth and community work and how it integrates young people and how to apply such practices and methods in my personal experiences like when doing voluntary work and projects and one of the main project I was involved in was a project called 'ballistic zone'. This was made up by the youth who were involved in this project the aim of the project was to bring in youths off the street after school, to educate them about vandalism, street crime, different background and religions disrespect to our community and what they thought of the social issues affecting them. They responded quite well, we did this by setting up different activity such as Setting up sporting activities the main purpose of this was to help young people from ethnic minorities and religiously diverse youth as well as other groups such as physically disable to come together and play under a set of rules as a team and unite as one. As well educating young people and helping them communicate with a different range of other young people so they can achieve stronger relationships and learn about one another in a enjoyable and creative way. ...read more.