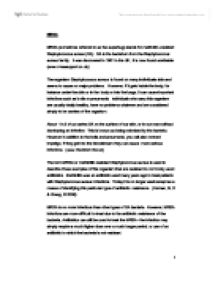 MRSA. About 1 in 3 of us carries SA on the surface of our skin, or in our nose without developing an infection. This is known as being colonised by the bacteria

MRSA MRSA (sometimes referred to as the superbug) stands for methicilin-resistent Staphylococcus aureus (SA). SA is the bacterium from the Staphylococcus aureus family. It was discovered in 1961 in the UK, it is now found worldwide. (www.mrsasupport.co.uk) The organism Staphylococcus aureus is found on many individuals skin and seems to cause no major problems. However, if it gets inside the body, for instance under the skin or in the body or into the lungs, it can cause important infections such as boils or pneumonia. Individuals who carry this organism are usually totally healthy, have no problems whatever and are considered simply to be carriers of the organism. About 1 in 3 of us carries SA on the surface of our skin, or in our nose without developing an infection. This is known as being colonised by the bacteria. However in addition to the boils and pneumonia, you call also contract impetigo, if they get into the bloodstream they can cause more serious infections. (www.nhsdirect.nhs.uk) The term MRSA or methicillin resistant Staphylococcus aureus is used to describe those examples of this organism that are resistant to commonly used antibiotics. Methicillin was an antibiotic used many years ago to treat patients with Staphylococcus aureus infections. Today it is no longer used except as a means of identifying this particular type of antibiotic resistance. ...read more.

(www.npsa.nhs.co.uk) Nurses wore badges and posters were put up saying 'it's ok to ask' but the question needs to be raised even with the campaign would patients feel comfortable asking staff to wash their hands? A research paper printed in the British Journal of Nursing in 2007 entitled 'Patients feelings about hand washing, MRSA status and patient information' asked this very question. The research showed that there was a consensus of opinion among many respondents that it would be seen as a betrayal of trust between patient and nurse if they asked this question, some respondents had made the comment they might be seen as trouble makers if they asked health care staff to wash their hands. There was a clear indication from the data collected that access to information on MRSA was lacking for patients and a huge 72% of people indicated they would not feel comfortable asking staff to wash their hands. Research undertaken in other studies supported the findings from this research that patients would feel more confident about asking staff and staff would feel more comfortable being asked to wash their hands if there was a cultural change in the attitude to make such practice routine in hospitals. To that end the profile surrounding should be maintained constantly. Undoubtedly, the current drive involve patients in shaping the future of health care through the foundation trusts and patients asociatations for example should be continued so that something as critical and fundamental as hand hygiene become beyond the need to question. ...read more.

In one study carried out at the National Spinal Injuries Centre at Stoke Mandeville Hospital, Buckinghamshire, 16 MRSA-positive patients with spinal cord injuries aged between 18 and 65 and their matched controls completed a series of questionnaires to measure aspects of the psychological impact on them. The measures used were functional independence, depression, anxiety, and the affective states of anger, vigour, fatigue and confusion. The MRSA-positive patients scored higher in all measures and the score for depression was the highest. (www.worldwidewounds.com/2004/november) We must also consider the stigma of having MRSA, recent surveys conducted showed that people visiting the hospital would be wary of coming into contact with a patient with MRSA for fear of contracting the illness themselves; they also identified that not knowing enough about the illness made them think the worst. (Duncan,C & Dealy, C 2006) So what is likely to happen in the future? Doctors are very worried about what the future holds for MRSA. The number of reports of MRSA infections rises by the year and more recent evidence suggests that deaths due to MRSA are increasing at a similar rate. Already the spectre of a bug resistant to all antibiotics is approaching, although new antibiotics are being developed all the time, pessimistic experts believe it is only a matter of time at current rates until virtually every weapon in the pharmaceutical arsenal is nullified. Nihilists suggest that there could come a point at which bacteria retake the upper hand and doctors as in previous centuries have no answer to some bacterial infections. ...read more.

It was not clear what the purpose of the essay was. The reader should quickly get a sense of what the writer intends to achieve, hence the importance of a clear introduction. Upon reading the work, I did get a good sense that the writer had done a lot of research into MRSA: what it is, how it is transmitted and how it survives. If the the work was intended as a fact sheet, then the aim has been achieved. The writing style was good overall.
4/5