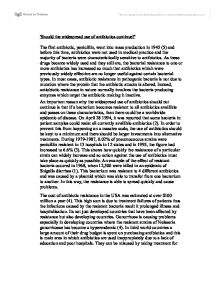 'Should the widespread use of antibiotics continue?'

'Should the widespread use of antibiotics continue?' The first antibiotic, penicillin, went into mass production in 1945 (5) and before this time, antibiotics were not used in medical practice and the majority of bacteria were characteristically sensitive to antibiotics. As these drugs became widely used and they still are, the bacterial resistance to one or more antibiotics has increased so much that antibiotics which were previously widely effective are no longer useful against certain bacterial types. In most cases, antibiotic resistance in pathogenic bacteria is not due to mutation where the protein that the antibiotic attacks is altered. Instead, antiobiotic resistance in nature normally involves the bacteria producing enzymes which target the antibiotic making it inactive. An important reason why the widespread use of antibiotics should not continue is that if a bacterium becomes resistant to all antibiotics availible and passes on these characteristics, then there could be a worldwide epidemic of disease. ...read more.

This bacterium was resistant to 4 different antibiotics and was caused by a plasmid which was able to transfer from one bacterium to another. In this way, the resistance is able to spread quickly and cause problems. The cost of antibiotic resistance in the USA was estimated at over $100 million a year (4). This high sum is due to treatment failures of patients thus the infections caused by the resistant bacteria result it prolonged illness and hospitalisation. Its not just developed countries that have been affected by resistance but also developing countries. Gonorrhoea is causing problems especially in developing countries where the resistant strains of Neisseria gonorrhoeae has become a hyperendemic (4). In third world countries a large amount of their drug budget is spent on purchasing antibiotics and this is main area in which antibiotics are used inappropiately due to a lack of education and poor hospitals. ...read more.

At present, antibiotics are being chemically modified to produce new antimicrobial agents and this process can only probably only continue for a limited time. In some places with some diseases only a few usable alternatives remain (4). In conclusion it would seem that the decreased use of antibiotics will in turn reduce the number of resistant genes and improved hygiene especially in developing countries will decrease the need of antibiotics. Antibiotics are clearly being misused thus this is resulting in resistant bacteria therefore a strict antibiotic policy should be enforced. Also, narrow spectrum antibiotics should be used when possible and doses should be restricted to the minimum. The antibiotic era may end up being just a small phase in the history of medicine and 'where bug proved smarter than the scientist' (4). ...read more.