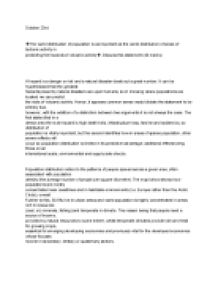 October 23rd �The world distribution of population is as important as the world distribution of areas of tectonic activity in predicting the hazards of volcanic activity�. Discuss this statement (40 marks)   A hazard is a danger or risk and a natural disaster deals out a great number. It can be hypothesised that the greatest hazards posed by natural disasters are upon humans, so in knowing where populations are located we can predict the risks of volcanic activity. Hence, it appears common sense would dictate the statement to be entirely true, however, with the addition of a distinction between two arguments it is not always the case. The first states that in a dense area the main hazard is high death tolls, infrastructure loss, famine and epidemics, so distribution of population is vitally important, but the second identifies how in areas of sparse population, other severe effects will occur so population distribution is limited in its predictive advantage; additional effects being those on an international scale, environmental and supply side shocks. Population distribution refers to the patterns of people spread across a given area, often associated with population density (the average number of people per square kilometre). ...read more.

With a population of 500,000 people, 147 were killed because the 40mph lava flows reached the densely populated area quickly. 1/3 of Goma was destroyed along with 14 villages along the path to Goma, from the Volcano and through the valley. Therefore, such an eruption would have benefited from focus on the population dispersion analysis rather than just when the volcano would erupt because evacuations needed to have been put in place. The pseudo-mathematical equation for risk &#39;Risk = Hazard x Value x Vulnerability / Capacity&#39; (Value indicating the elements at risk (number of human lives, economic value of property, etc., while vulnerability refers to factors which increase the susceptibility to the impact of hazards) highlights how the number of human lives and property at risk and the susceptibility of these individuals is a bigger factor than the simplicity of seismic activity distribution because the environment can recoup and the volcano is the effector not the effected. More importantly, the density of &#39;Value&#39; and &#39;Vulnerability&#39; was the factor which most increased and determined hazards.   Contrastingly, the 1980 eruption of Mount St Helen&#39;s did not lead to massive casualties because, whilst there were some deaths as a result of the eruption, there were relatively few because of its location in Washington State, with no nearby cities. ...read more.

The difference lies in how some areas, i.e. those which are densely populated, have found that population is vital in determining the severity of hazards at a time of volcanic activity, whereas there are other areas where there has been a small population i.e. sparsely distributed populations, but a massive international effect has occurred as a result of the eruption, leaving population distribution with no predictive capacity in such cases. Therefore, no one factor can be stated as the single most important item in determining whether or not and to what extent a volcano should be perceived as a hazard because each volcanic event is unique. For the future the statement, "Europe, Latin America and the Caribbean, Northern America and Oceania are highly urbanised, with proportions urban ranging from 70 to 82 per cent in 2010. Africa and Asia remain mostly rural, with only 40 and 42 per cent of their population living in urban settlements, respectively. By mid-century, however, all regions will be mostly urban, indeed more than 60 percent urban, according to current projections" (United Nations Department of Economic and Social Affairs Population Division) is suggestive that population distribution is only going to become more present as a factor, but will never be the sole variable. Georgia Amos   ...read more.