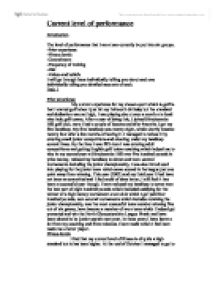 Current level of performance Introduction The level of performance that I am at can currently be put into six groups. -Prior experience -Fitness levels -Commitment -Frequency of training -Diet -Values and beliefs I will go through these individually telling you about each one individually telling you detailed accounts of each. Task 1 Prior experience My current experience for my chosen sport which is golf is that I started golf when I just hit my thirteenth birthday but the standard and dedication was not high, I was playing about once a month at a local nine hole golf coarse. After a year of doing this, I joined Stinchcombe Hill golf club, were I had a couple of lessons and after 4months I got my first handicap. My first handicap was twenty eight, which shortly became twenty four after a few months of having it. I managed to reduce it by entering small junior competitions and shooting under my handicap several times. By the time I was fifth teen I was entering adult competitions and getting English golf union coaching which helped me to take in my second year at Stinchcombe Hill over five hundred pounds in prize money, reduced my handicap to eleven and won several tournaments including the junior championship, I was also introduced into playing for the junior team which came second in the league just one point away from winning. ...read more.

golf balls with along iron - Hit ten balls with a wood -On short game area - Practice chipping from five yards then when you hole one go to ten yards then hole one of them and go from fifth teen yards. -Go to practice bunker with five balls and don't stop until you hit all five continuously from twenty yards to within two club lengths. -Putting green -Putt five balls in two shots or less for each ball continuously from fifty too seventy feet. -Hole five putts and you can't leave the putting green until you have holed every ball continuously from three feet then six feet then nine feet. -Warm up -Twenty star jumps -Two minute jog on the spot -Stretch major muscles used in round. Diet What diet! I eat what I want when I want I eat a regular amount of all the seven food groups. I eat near enough every type of food and I have a very high metabolism and do a lot of physical exercise to stop me getting over weight. I feel that I eat far too much including four meals a day with snacks in between but I have a very good physique and am if any way underweight for my height as I am six foot and eleven and a half stone. An average day of food consumption in my life would be two slices of toast in the mourning Followed with a sausage roll a couple ...read more.

Main barriers Here is a list of the main barriers I need to over come to achieve my short, medium and long term goals. - More practice in winter. - At least one round of golf at the weekend. - At least three hours of practice a week. - At least five hours of practice in the summer. Task 4 Evaluation of my performance There are many factors in the performance of golf from putting to anxiety control so I have devised a programme to show how I have performed in the last month. (V. poor) 1 2 3 4 5 (V. good) Putting - Chipping - Sand play - Short irons - Mid irons - Long irons - Driving - Visualisation - Concentration - Anxiety control - Motivation - Confidence - Effort - Practice time - As you can see my analysis table shows that I am performing poorly in most areas of my game at the moment this is due to lack of practice. I have practiced quite lot in the last month but I have only practiced on driving, mid irons, and short irons which is why in performing good in them areas at the moment. My short game is very poor at the moment which is affecting other areas such as motivation, confidence and most of the mental game. I feel that if I get my short game back to a high standard which will involve a lot of practice then I'll can get my mental game back as good as it once was. ...read more.