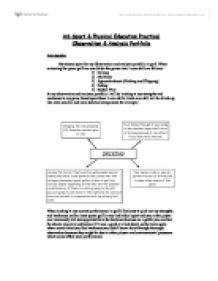 My chosen sport for my Observation and analysis portfolio is golf.

AS Sport & Physical Education Practical Observation & Analysis Portfolio Introduction My chosen sport for my Observation and analysis portfolio is golf. When reviewing the game golf we can divide the games into 5 core skills as follows: - 1) Driving 2) Mid Irons 3) Approach shoots (Pitching and Chipping) 4) Putting 5) Bunker Play In my observation and analysis portfolio I will be looking at my strengths and weakness in my game based upon these 5 core skills. Each core skill will be divide up into even smaller and more detailed components for example: - When looking at my current performance in golf I find easy to pick out my strengths and weakness, unlike most sports golf is very individual sport and you as the player can imminently tell strong points from the bad ones because as a golfer you can feel the shoots you play and known if it was a good or a bad shoot, unlike team spots where some times you find weakness you didn't know about through thorough observation because they might be due to other players and environmental pressures which could affect your performance. At present I feel my major strengths according to the core skills in golf are as follows:- 1) Driving 2) Mid irons 3) Putting With driving being my strongest strength and putting probably being my weakest out of my personal strengths. In addition to this information this is only a very brief introduction into my strengths and weakness of the 5 core skills and just shows the general outline to my portfolio. Section B/The Analysis process Section B is the analytical process in which I will analyse my current performance level in the 5 core skills: - * Driving * Mid Irons * Approach shots * Putting * Bunker Play And compare them to performers below and above my skill level. The structural model below shows the outline I will be following when analysing my own and other performers skills. ...read more.

As I am very focused during the shoot the shoot is on target. My swing and timing with my mid irons is also good, which plays a key role in the accuracy of my shoot. Compared to Terry for example, when playing a long par 3 hole which requires using a mid iron club my shoot will be accurate and near the green as for Terry's shoot which has a high chance of being inaccurate due his faults in the core skill. Approach Shoots (Pitching and Chipping) Weakness Accuracy of Shoot/ Alignment My short game seems to be quite inaccurate around the greens this is due to my judgement. I seem to often miss judge the speed of the green or the length to the pin. Also I have a weakness in my alignment of my pitching because I miss judge the pin directing and produce an inaccurate shoot. I also lift my head too early when playing some of my approach shoots having an affect on the accuracy of the shoot because I try to look at the shoot to early. Compared to Tiger Woods who judgment is very precise and his head is steady whilst hitting his shoot. Tiger is very accurate in shoot and is able to put various spin on the ball to make his shoot even more accurate. Stance When observing my stance when playing my short game it is very variable because I don't always position my body in the correct position so I don't get an accurate enough shoot. My feet seem to be angled incorrectly when tacking my shoot having an affect on the alignment of my stance. When I need to get a lot of height on the ball I don't always lean my stance back enough causing the shoot to flatter, by the shoot being flatter the ball doesn't have enough back spin causing it to role forward instead of stopping when it pitches on the green. ...read more.

By my down swing being uncontrolled it has a negative effect on my follow through causing my to stab/punch at the ball resulting in an inaccurate shoot. This is relate to an psychological factor because I think I am going to under hit the ball in my mind and end up hitting it harder than I should. Corrective practice I could employ different types of practices to improve this psychological error. I could employ the trail and error method and practice-hitting ball with a verity of powers so I can tell my self I don't need to hit the ball so hard. If I keep repeating this I want to hit the ball so hard so my shoot will be more accurate. Weakness 2 Follow through Cause of weakness When observing my follow through of my short irons I have a weakness where I punch at the ball and not follow all the way through with the shoot. This is cause by my thinking I am going to hit the ball too hard if a follow through because my down swing is too aggressive. The cause of this weakness is that there is a very limited provision of facilities in the area where I live so I am not able to practice chipping and pitching. This is because there is a lack public pitch and put facilities and also a lack of golf practice schools. Corrective practice I could improve on this by joining a private facility for example a private golf club, which would have practice facility's for chipping and pitching and I would also be able to use the golf course as much as like, the limitation with this is that I costs alto of money to join private clubs and the waiting list or very long. Core Skill - Bunker play Weakness 1 Body Position within the Bunker . Core Skill - Putting ...read more.