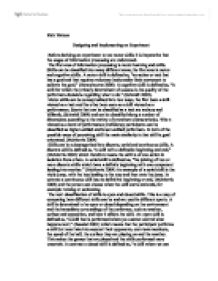 Designing And Implementing an Experiment

Rick Watson Designing and Implementing an Experiment Before devising an experiment to test motor skills it is imperative that the stages of information processing are understood. The first area of information processing is motor learning and skills. Skills can be classified into many different areas; the first area is motor and cognitive skills. A motor skill is defined as, "an action or task that has a goal and that requires voluntary body and/or limb movement to achieve the goal." (Honeybourne 2000) A cognitive skill is defined as, "A skill for which the primary determinant of success is the quality of the performers decisions regarding what to do." (Schmidt 2004). Motor skills can be conceptualised into two ways, the first been a skill viewed as a task and the other been seen as a skill viewed as a performance. Sports that can be classified as a task are archery and billiards, (Schmidt 2004) and can be classified along a number of dimensions according to the variety of prominent characteristics. When viewed as a level of performance proficiency participants can be classified as higher-skilled and lower-skilled performers. In both of the possible ways of perceiving skill the main similarity is that skill is goal orientated. ...read more.

To explain this model it is easier to breakdown the model into separate areas. Input is represented by a stimulus presented within the participant's immediate surroundings. Some stimuli are clearer than others, for example a starters gun in a running race is a lot clearer to interpret than during a football game where there are more than one stimuli happening at once. The decision making section can be split into 3 further subcategories which are stimulus identification, response selection and response programming. Stimulus identification is recognising and identifying input from the immediate surroundings, this leads into response selection which is the decision on response and finally leads into response programming which is the organisation of response, which is generally subconscious. Output is the response produced as a result of information processing, which is not always successful. Feedback is the aesthetic, verbal and visual results from the skill that has been performed. Feedback is very useful as, "it directs the learner's attention to the important aspect of movement co-ordination," (Wulf 2007). Reaction time indicates the speed and effectiveness of decision making. Reaction time is defined as, "the elapsed time between the presentation of a sensory stimulus and the subsequent behavioral response," (anon, Internet). ...read more.

To further test Hicks Law of increasing stimuli in relation to increase of reaction times it was decided that for the final part of the experiment that differing amounts for each hand would be called at the same time. As before this will be repeated 5 times and timed to record how long it takes to make the amounts. This was done to see if by increasing the differing stimuli, such as having differing amounts for each hand, how the reaction times would occur. This experiment was chosen as it was decided it fulfilled several categories to test decision making, reaction time, information processing and Hicks Law. This is so because with the experiment progressing into having different stimuli it therefore increases the amount of time it takes to process the information and have a correct output. This links into Hicks Law which states that the increase of stimuli means an increase in reaction time. This experiment tests people's information processing abilities as it steadily increases the amount of stimuli and therefore is more challenging to the participant. It also tests reaction times as with the participants were introduced to more stimuli it can be compared, due to the recording of results, whether the more stimuli there is the longer the reaction time is to produce a correct output. All in all it was decided that this experiment covered these four main criteria. ...read more.