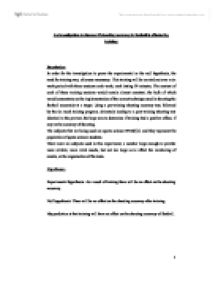 An investigation to discover if shooting accuracy in football is effected by training.

An investigation to discover if shooting accuracy in football is effected by training Introduction In order for the investigation to prove the experimental or the null hypothesis, the need for training was, of course necessary. This training will be carried out over a six week period with three sessions each week, each lasting 30 minutes. The content of each of these training sessions would remain almost constant, the bulk of which would concentrate on the implementation of the correct technique used in shooting the football accurately at a target. Using a pre-training shooting accuracy test, followed by the six week training program, ultimately leading to a post-training shooting test identical to the pre-test, the hope was to determine if training had a positive effect, if any on the accuracy of shooting. The subjects that are being used are sports science BND(C)1, and they represent the population of sports science students. There were six subjects used in this experiment, a number large enough to provide more reliable, more valid results, but not too large as to affect the monitoring of results, or the organisation of the tests. Hypotheses; Experimental hypothesis: As a result of training there will be an effect on the shooting accuracy. Null hypothesis: There will be no effect on the shooting accuracy after training. My prediction is that training will have an effect on the shooting accuracy of football. Literature review; For the experiment we will be using training to evaluate if there is a positive effect on the shooting accuracy of a football into a 5 a-side goal from a given distance. The training being partaken is technique based, concentrating and providing emphasis on striking the ball correctly and progressing to hitting targets from distance. The purpose of this experiment is to provide an argument for or against the benefits of training. Is training beneficial in improving technique? Does training provide the desired responses in shooting accuracy? ...read more.

Following the pre test the group participated in three training sessions per week, focusing on technique building exercises. Initial exercises entailed the shooting of a stationary football; hitting a target approximately 5-10 metres away depending on the pre-test scores of the individual. Those with lower pre-test scores had to hit the target from a shorter distance, whilst those with higher pre-test scores would move further away, in every case the `target` initially would be a normal indoor 5 a-side goal. This `target` practice put emphasis on correct technique, and whilst not focusing on hitting specific areas of the goal, which we would again progress to into the duration of the six week sessions, focused on just scoring into the goal. The target practice drill would form the vast majority of each 30 minute training session, with alternate drills consisting of perfecting technique, but not in hitting a target but reaching the goal of improving the fundamentals of each shot. i.e. keeping the ball low, and striking the ball with the instep of the foot. After the duration of the six week training schedule, a post test was to be taken by each member of the group, each member would take part in an identical test to the pre training test, taking 10 shots at the 5 a-side goal, and scoring their accumulative points total against the score in the pre test. Results Pre training test Name Shot 1 Shot 2 Shot 3 Shot 4 Shot 5 Shot 6 Shot 7 Shot 8 Shot 9 Shot 10 Total score Brendan (1) 3 3 2 2 1 2 1 3 1 1 19 Elliott (2) 3 1 1 3 1 2 2 3 1 1 18 Glenn (3) 1 1 1 2 1 1 2 3 2 3 17 Henry (4) 2 1 1 1 3 3 2 1 1 2 17 Laura (5) 1 1 1 2 1 1 3 2 1 1 14 Jonny (6) ...read more.

Although the results proved both my prediction and the experimental hypothesis right, there are, of course, considerations which need to be taken into account. Natural deviations in results may occur because of natural or unwanted variants. Some of these variants may include: * The frequency, intensity and duration of each training session remaining the same * The environment in which training sessions take place (weather being a natural variant) * Playing surface remaining constant during training sessions and both tests * There will be a natural variation between subjects because of the participation of some in regular football more so than others * For both pre- and post- tests the equipment as mentioned in "method" needs to be the same, as does preferably the kit used by the subjects during both tests * There is a natural deviant between each subject's lifestyle and any contraindications during training sessions and tests, and days leading up to both i.e. sleep/eating patterns, injury or any other exercise partaken previously. There were some irregularities because of attendance or non-attendance of training sessions and either pre- or post- tests, therefore training was either not undertaken or was unmonitored. Also, not all tests were taken at the same time. Evaluation The experiment did not go as well as planned because of aforementioned absences, particularly from training, usually undertaken by only two or three members of the group. Although this did not have an effect on the ultimate conclusion that we drew in rejecting the null hypothesis, the accuracy of the results were definitely affected. If I repeated the experiment again, the primary factor which I would change would be the attendance. Contents 1 - Introduction and Hypothesis 2 & 3 - Literature review 4, 5, 6 & 7 - Method 8 & 9 - Results 10, 11 & 12 - Statistical analysis 13, 14 & 15 - T-tests 16 - Discussion and conclusion 17 - Evaluation 19 - Bibliography Also attached are graphs and copies of the study by Godik et al that formed the literature review. ...read more.